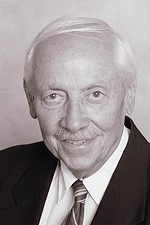 His ambition was inspirational.  His allegiance indescribable. His success was incomparable.  As a three-sport athlete, a service member, or as an educator, 2007 Branford Sports Hall of Fame inductee Karl W. Marsh developed a work ethic for many to emulate.

Born in Branford on November 15, 1925, Karl went thru the Branford school system and graduated from Branford High School in 1943.  In the winter of 1939-40, he was a member of the Branford High School Ice Hockey team. The Hornets recorded a perfect 6-0 win/loss record, defeating Norwalk (4-2) and (6-0), Lewis High (10-0), Commercial (2-1), and Manchester (6-3).  Branford closed the season by recording 28 goals to their opponents six.  He was fortunate enough to play on what was the last hockey team the school had for years.

Off the playing field, Karl was a devoted member of the school’s Service Squad, Hornet Board Newspaper, and Class Book Committee as its’ Business Manager. In his senior year, “Bucky” as he was nicknamed, was voted “Most Sociable Boy” by his classmates.

After high school, Karl went into the service and following basic training, he was assigned to an air base in Bartow, Florida.  He played baseball for the base team in 1944 before he was shipped overseas to India.  After the war and with the rank of Buck Sergeant, he attended Dartmouth College, where he played freshman baseball. An arm injury forced him to take a couple of months off before he returned on the diamond for the Branford Townies baseball team.

Immediately after graduating from college in 1950, Bucky went to Southern California to try to break into the movie business as a scenario writer.  After finding a steady job, tonight’s inductee hooked up with a semi-pro baseball team that had on its roster, major league baseball hall of famer and manager, George “Sparky” Anderson.

Bucky changed jobs in 1960 and became an English teacher at Amity Regional High School in Woodbridge, Connecticut.  While there, he became an assistant hockey coach his first year and for the ensuing three years, he became head coach.   In his third year at the helm, the 1963-64 team went undefeated in the District League and won the title for the first time in school history.   Shortly after that season, Bucky was named Coach of the Year by the Connecticut High School Coaches Association.  He resigned from coaching and teaching that year and entered the banking world with the First New Haven National Bank.

The inductee was a vital component to the start of the New Haven Nighthawks hockey franchise.  Karl and four of his colleagues worked over a span of five years to acquire the franchise from the American Hockey League and finally on October 4, 1972, the Nighthawks played its first game in the New Haven Coliseum.

Married to wife, Sylvia, Karl is the father to son, Philip and daughters, Amy (husband, John) and Elizabeth (husband, Rob) and grandfather to Grace and Eve Coolidge, and McClean and Whitney Macionis.