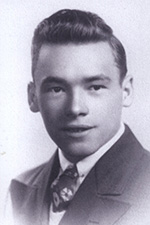 His zest for competition and teamwork was unrivalled.  His popularity evolved around his civic involvement and unselfish demeanor.  Tragically, the potential for future stardom ended at too early of an age for 2004 Branford Sports Hall of Fame inductee Joseph “Smokey” Yasevac.

A student at Branford High School from 1935 to 1938, tonight’s inductee was a two-sport athlete, competing in football and basketball.  As a halfback and co-captain on the ’38 high school football squad, Branford gained second place in the Housatonic Valley Conference after a very successful season. The Hornets dropped but one league game during the season while the other losses were due to larger Class “A” schools.  He was named to the 1937 All-Housatonic League football team as a back.  One of his many claims to fame was his 95 yard punt return for a touchdown versus Shelton in a night game.

As a member of the basketball squad, during his junior year, Branford won the Housatonic League Class B Championship and were the Connecticut Class B champions. They challenged the Class A runner-up, Bristol for the right to represent Connecticut in the New England Tournament in Portland, but were defeated after a long hard battle to Bristol (30-22). That team turned in the most successful record of any team in Branford high School history.  Under the able guidance of fellow Branford Sports Hall of Famer and coach John E. Knecht, Jr., ( class of 1988), “Smokey” led the Hornets to the only undefeated record in the state. They captured the Housatonic League Conference championship and Connecticut Class “B” State Championships. For the fourth year in a row Branford claimed the Class “B” State Championship. In 1937-38, Branford won 21 straight games, marking a perfect and undefeated season. In tournament competition, Branford scored the greatest total points of any team in either Class “A” or Class “B” tournament (120-62) and also the highest score in any single game.  Joseph played on the boys’ basketball team with Hall of Famers’ Steve Hylinski (’88), Stan Petela (’89), Joseph Naimo (’93), James Barba (’95), Paul Ward (’96), Albert Torino (’97), Stan Gumkowski (’98), and William Proto (’99).

In addition to his remarkable performance on the field, “Smokey” excelled in the class room as well. He was voted President of his senior class, served as Junior Class Vice President, was President of the Varsity Club, and a member of the Foreign Relations Club, Science Club, and Class Book Committee.