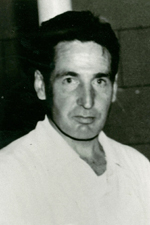 If there was ever a man who placed life and sports in perspective throughout the town of Branford, Joseph Purcell certainly sculptured a fine example.  Always one to give himself for the betterment of others, whether on the basketball court or on some committee, this Branford Sports Hall of Famer is remembered as having a great influence on Branford athletes in the past.

Besides leaving a strong impact in the classroom, Purcell excelled on the basketball court.  A member of the varsity basketball team for four years and captain of the team in 1931, Joseph played the guard position under 1988 Branford Sports Hall of Fame inductee Coach Johnny Knecht, Jr. and was an All-State basketball player for the Hornets.  In  1930, the Branford Hornets came off one of its finer seasons, winning a championship in Purcell’s junior year.  In his senior year, Joseph played with many talented players, among them 1990 Hall of Fame inductee Harry “Heb” Williams.

One of Branford’s civic minded individuals, Purcell was awarded the Branford Exchange Club’s “Golden Deeds Award”, given to an individual who has been recognized as one of the town’s outstanding contributors to the youth.  Willing to donate all his time to kids and sports, Purcell will always be remembered for his efforts at the Branford Community House with 1988 inductee Joseph Trapasso.  Regardless of the situation, Purcell gave his time to organize tournaments, to run clinics, to officiate games, and all the time, just to be there for others.  In addition, Purcell served in World War II in the Pacific Theater.

Besides his excellence as an athlete and volunteer, Purcell demonstrated his talents as the Branford Hornets football team manager in 1930.  During that year, Purcell and captain Peter Batrow led the Hornets to its first Housatonic League Championship.  Under the coaching of Johnny Knecht, Branford after losing to Fairfield 12-0 in the first game of 1930, went on to win eight straight including six games where they shut out their opponent.  Throughout the year, Branford outscored its opposition 99-30.

Elected by his senior classmates as the most popular boy, the boy who has done the most for his class, and the most sociable boy, Joseph Purcell enters the 1991 Branford Sports Hall of Fame tonight.  His sister, Agnes Chamberlain, reflects on what the award would have meant to him were he still alive today.  Purcell passed away in 1989.

“This is what makes me so happy and yet so sad because Joe lived for something like this in Branford.  He would say this award is one of the best things he ever could have expected from the town of Branford.  His love of sports and the love of children was his whole life.”