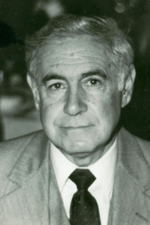 It’s been 38 years since Joe Orsene left our town to teach academics and sports in Central Connecticut. His successes have been largely as a football mentor at Southington High where in six years as head coach his teams were to score 1526 points to the opposition’s 513. Over that span, Joe’s charges lost only four games in 55 outings.

Already enrolled in the Connecticut Coaches Hall of Fame, Joe was thoroughly based in football, basketball, and baseball at Branford High School from 1940-44 under the guidance of John E. Knecht. He did not have an imposing physical build but was a coach’s answer as the team leader. He matriculated at Manhattan College after two years serving the United States Navy (1944-46). There he embarked on a program that led to a Bachelor of Science degree in 1949. After graduating from Manhattan, Joe entered Southern Connecticut State University from which he received a Master of Arts degree in 1951, abetted by side courses at Yale University. Ten years later he was awarded Connecticut’s Sixth Year Certificate in Administration.

He was a familiar figure during Branford summers and worked as a lifeguard at Branford Point. He coached the Branford’s Post 87 team to contention in the state’s American Legion baseball league and aided as a coach for the old Branford Red Sox. Also, he was vital in assisting the Branford Review’s Baseball School.

Joe’s first professional teaching experience came in 1951 in Torrington where he taught history and social studies. A year thereafter he switched his allegiance to Southington where he eventually succeeded long time mentor, Joe Fontana a legend in his own right. He assisted in basketball, for which he was noted in his high school days; baseball, for which he was duly acclaimed; and track, rising to head coach in football and track.

Taking over for Fontana as Southington football’s top man in 1961, Joe’s teams swept to 8-1 records for two seasons and were undefeated for the next four seasons when his Knights lost to Middletown to stop the 33 game winning streak. Joe’s team scored a total of 1526 points while giving up only 513. He was acclaimed as Connecticut’s High School Coach of the Year in 1964.

In succeeding years, he has divided his time as a certified three sport official. He shied from becoming a head coach again, citing his wish to avoid the mental strain. Nonetheless, he became an assistant coach for the Bridgeport Jets, one-time farm team of he N.Y. Jets of the AFC. He also assisted with the Southern Connecticut’s gridiron team.

He now lives in Cheshire with his wife, Angela (Polastri), and son, Mark, and continues to teach at Southington where he has been since 1952.