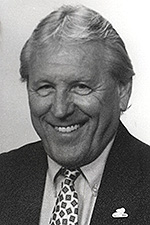 For every challenge  1998 Branford Sports Hall of Fame inductee  Joseph M. Klimas encountered as a three-sport high school athlete, a college football quarterback, a Recreation Director, or as a Sports Reporter, there was always one intangible among the mix – success.

Joseph attended Branford High School from 1951 to 1955 and played football ( back), basketball (forward), and baseball ( catcher).  In his freshman season, as a member of the football team, Branford  gained a share of the Housatonic League title with East Haven and Shelton, earning a 4-3-1 win/loss/tied record. During that season, the Hornets defeated previously undefeated and unscored upon arch-rival East Haven, by the score of 7-6.  Coached by fellow inductee Warren B. Sampson ( inducted in 1992), Joseph was a teammate of Joe Paul (1993), Russell “Butch” Gordon (1994), Robert J. Massey Sr. (1994), and Vincent Casanova (1998). Joseph led the Hornets football team in his senior season to a 4-3 win/loss record and in basketball, the Hornets earned a birth in the Class “B” State Tournament with an 11-8 win/loss record  and eventually lost in first round action to Darien. He also played baseball for inductee Stan Petela (1989).   Joseph was a National Honor Society member, Class President for four years and Student Council Vice- President and President while at Branford.

Following graduation, Joseph attended the University of Connecticut from 1955 to 1960 where he played quarterback as a walk-on athlete and also served in the U.S. Naval Air. He also played defensive back and kicker for the Huskies. Joseph was a member of the 1960 Yankee Conference championship team and held the field goal record at UConn for several years. While there, he earned the nickname, “Joe the Toe” and named to the All East Football team in 1961. Tonight’s inductee went on to play minor league football as a quarterback and place-kicker for the Indianapolis Warriors in the United Football League, the Ansonia Black Knights in the  Atlantic Coast Football League, and the Meridan Shamrocks in the New England Football League, where they were champions in 1965.  Joseph played on recreation teams as well ranging from the Branford Townies in the Shoreline Baseball League to the Elm Tree, Schieffles, and Silver Dollar Restaurant Teams in softball.

From 1963 to 1966, Joseph was the Assistant Director of Parks and Recreation in Branford under the leadership of fellow inductee Joe Trapasso (1988). Later, he served as Director of the Madison Parks and Recreation Director from 1966 to 1971.  He continued in the Recreation Field in different parts of the country as a Recreation Planner in Manchester, New Hampshire (1971-72), a Deputy Director (1972-74), and then as a Recreation Director in Marco Island, Florida form 1974 to 1975. Joseph then turned his attention to the Sports Media field from 1975 to 1978 as the Assistant Manager/ Sports Director for WRGI Radio in Naples, Florida as a daily sportscaster and play by play man for high school football and basketball. He became Sports Director for WNOG AM – Palmer Cablevision in Naples, Florida, where he conducted daily sportscasts and was a host of radio sports talk shows and the Joe Klimas Sports Corner on television from 1978 to 1987.  During this time, he won several awards including the National Cable Television Association (ACE) Award  in 1983, the Unsung Hero award from the Collier Country Sportsmen’s Association in 1985, the 1986 Gulfshore Life Magazine  Most Interesting Personality in Southwest Florida, and in 1989 was honored by the Florida Interscholastic Athletic Administrators Association for his promotion of high school athletics.  Currently, Joseph is a Sports Anchor on the TV-10 nightly news and is the host of “Klimas in the Morning”, a radio talk show on 92.1 FM.  He is in his 12th year as the play by play announcer of TV-10’s High School Football Game of the Week and prior to that was a radio commentator for football and basketball.

Now residing in Marco, Island, Florida with his wife, Barbara, Joseph is the father to two children, daughters Kerri and Kristi.