Inductees by NameJonathan A. Barnes 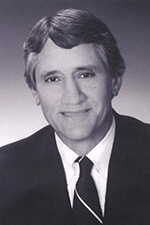 During the 1960’s, the sport of track and field did not acknowledge high school All-American candidates.  Clearly, if such an award existed, 2004 Branford Sports Hall of Fame inductee Jonathan A. Barnes would have easily claimed the honor for his accomplishments as a member of the B.H.S. track team from 1960 to 1963.

Known as one of the greatest sportsmen of his era, Jonathan attended Branford High School from 1960 to 1963, where he was considered one of the two premier distance runners in the state of Connecticut during his junior and senior years.  During his sophomore season at B.H.S., the sport of track and field took on its inception. With only six runners on the team, including Jonathan, Branford won the Housatonic League title based on its best finish in the state and a record of 5-2. It was during this time that Jonathan began running the half and mile events and was undefeated in dual meets. At one point, he held the BHS records for both events and the 880 event record he held lasted until the late ‘90’s.   In 1961, with no seniors on the team, Jonathan was elected captain. With only eight runners and a self coached squad, Branford posted a 4-1 win/loss record, losing only to Notre Dame by a point.  During his senior year, Jonathan remained captain and the team claimed an undefeated record in dual meets and fifth place ranking of all Class B schools. He ran for Hall of Fame coaches Stan Petela (1989) and Tom Murray (1992) during his career at B.H.S.  Overall, Jonathan won both the half and mile each of the three years in the Housatonic League and held both of those meet records by the time he graduated.  Another highlight for tonight’s inductee was competing in the New England Championships in Hanover, New Hampshire and placing 6th overall representing Branford High School.

Following graduation, Jonathan attended Cheshire Academy, where he competed in Cross Country and Indoor and Outdoor Track.  During the 1963-64 season, Cheshire Academy earned the New England Prep School Cross Country Championship and Jonathan was third best on the team and 10th in New England. He won two events in the Indoor Championships setting a record in the 600 yard relay.

Jonathan went to Lafayette College from 1965 to 1968 where he earned his Bachelor of Arts in Economics. He participated in cross country for three years from 1965 to 1967 in addition to being named captain in his senior year.  Barnes set five individual school records in track and field, including the mile (4:11.1) and the half (1:52) and was a member of two record setting relay teams.  The Middle Atlantic Conference mile champion in both 1967 and 1968, he placed sixth in the 1,000-yard run at the 1967 NCAA Track and Field Indoor Championships.  Barnes was named Outstanding Runner of the 1967 Lafayette team that went 11-1.  He competed indoors in virtually all major meets on the East Coast, by invitation, against many of the best middle distance runners of that time (Millrose Games, Phil Inquirer Games, and the Boston K of C Games).  During his senior year, he placed 6th in the 1,000 yard NCAA Indoor Championship race at Cobo Arena in Detroit. In addition to winning the League Mile Championship in 1967 and 1968, Jonathan was awarded Lafayette College’s Harry Jahn Most Valuable Athlete Award in 1968 and was later elected into the Lafayette Athletic Hall of Fame.

After receiving his MBA from Bryant College (now University) in 1976, Jonathan was employed by Sovereign Bank in Providence, Rhode Island as a Vice President in Business Banking. In his free time, he is actively involved as Treasurer with Bradley Children’s Hospital and the Providence Jewelry Museum, a board member of the Rhode Island Board of

Residing now in Barrington, Rhode Island, Jonathan is the husband to wife, Patricia, father to daughters, Christine and Heather, and stepfather to sons, Walter and Michael Zesk.