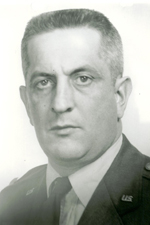 Allegiance, Dedication, Honor.  These values are the important cornerstones for those privileged enough to serve and protect our country.  It is those same principles which make an athlete a greater individual, a hero in a varied spotlight.  1993 Branford Sports Hall of Fame inductee John Yusievicz was a person who succeeded on the playing field in baseball and basketball and equally prospered in the United States Air Force.

Born in Branford on October 5, 1919, Yusievicz attended Branford High School and graduated in 1937, playing both basketball (as a guard) and baseball (as a catcher.)  As a member of the Branford High School baseball team, Yusievicz played under 1988 Branford Sports Hall of Famer Coach John Knecht, Jr. and with teammates Joseph Naimo and Steve Hylinski, who also enter tonight’s Sports Hall of Fame.

In 1937, Yusievicz played on the Hornets basketball squad in one of its finest seasons with a 15-4 overall record, including an eight game winning streak and 14 wins out of its last 17 games.  The 1937 team won the Housatonic League Class B Championship for the second consecutive year and entered the Class B Tournament, becoming the Connecticut Class B Champions for the third consecutive year, again teammates with Joseph Naimo and Steve Hylinski.  Yusievicz and the Hornets experienced little trouble in its tournament games, defeating Robert Fitch (43-14), Wallingford (38-17), and Naugatuck (31-21), challenging the Class A Runner-Up Bristol team for the right to represent Connecticut in the New England Tournament at Portland. Branford fell to defeat 30-22.

After graduating from Branford High School, Yusievicz attended the University of Connecticut, where he played football, baseball and basketball. On the same hardwood floor as 1989 Branford Sports Hall of Fame inductee, Bob Donnelly, Yusievicz and the UConn basketball team enjoyed some fine moments.  In 1938, Yusievicz was named to the All-Conference First Team and finished fifth in the league in scoring with 105 points in eight games.  As captains for the 1940-41 season, John Yusievicz and Bob Donnelly led the Huskies squad to a 14-2 season, and were crowned Co-champions in the New England College conference with the Rams from Rhode Island.  In the same year, Donnelly and Yusievicz were selected to the First Team All-Conference Team while combining for 251 points scored.

Yusievicz started his Air Force career in July of 1941.  Upon receiving his commission, he was assigned to a fighter group in Boston, Massachusetts and served here in the United States and overseas.  He was awarded the European-African Middle East Campaign Medal, the Bronze Star Medal, the Distinguished Unit Citation and many more commendations.  He was a member of the U.S. Air Force for 28 years.

“John was a very modest, quiet guy.  I’m sure he would have been pleased.  He would have considered this award a great honor,” said Bob Donnelly.