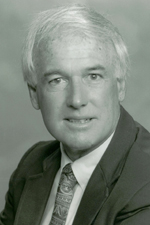 Whether it is standing by poolside during a practice or a swim meet, 1995 Branford Sports Hall of Fame inductee John R. O’Connor exhibits a pensive, stoic, composed look on the outside.  However, internally, the Branford High School swim coach demonstrates a demeanor all together differently-one of intensity, determination, and excitement.  Through his maneuverability of emotions, his passion for swimming, and his commitment to his students, O’Connor has conceived a trademark of excellence in high school swimming.

Born on September 16, 1944 in New Haven, the son of Doris and Robert (Okie) O’Connor, tonight’s inductee grew up around water all his life.  As a child, he swam for the New Haven Boys Club, the New Haven Y.M.C.A. and for Wilbur Cross High School.  John’s major impact in swimming came from Doctor Bruce Hutchinson, the swim coach at Southern Connecticut State University, who saw O’Connor earn a spot on the NCAA All-American team after placing eighth at the NCAA Championships in 1966, his senior season.

After graduating from Southern, John began his career as a professional educator in Connecticut as a classroom teacher, a special education teacher, and the last twenty years as the school Psychologist at the Branford High School.  John began his coaching career at various summer clubs in 1966 and was then hired by the Branford Stingrays in 1974 before assuming the role of Boys Swim Coach at Branford High School in 1975.  In 1980, he was hired as the high school’s girls coach.  Tonight’s inductee earned his first boys state title in 1983, when his Branford team finished with an overall record of 11-3 and won the Class M Division State Championship.  The boys swim team later captured three consecutive state titles in 1985, 1986, and 1987 as well as winning two additional titles in 1991 and 1992.  The 1989 girls swim team achieved O’Connor’s first girls state title, finishing with a record of 9-1 and claiming the Class M state championship.  Two years later, in 1991, the girls wrapped up another state title, defeating arch-rival Ridgefield by the score of 262-246 in the Class M State Championship.  John’s teams have also been state runner-ups 10 times.  The boys teams earned that distinction in 1982, 1984, 1988, and 1989, while the girls squad accomplished that same feat in 1987, 1988, 1990, 1993 and 1994.  Through 18 seasons, John holds a lifetime record of 312-94-4 as well as coaching 11 All-American swimmers and 142 All-State swimmers.  After two losing seasons, O’Connor and his Hornets swim teams have claimed 32 consecutive winning seasons (boys and girls combined).  He has been named Connecticut Boys Coach of the Year by the Connecticut High School Swimming Association of the year by the National High School Association in 1991 and 1995, and Connecticut Coach of the Year in All Sports by the Connecticut Sports Writer Alliance in 1992.

Married to Jean Charlotte since August of 1966 and father to two sons, Jeffrey (26) and Sean (23), John is proud to accept induction tonight into the Branford Sports Hall of Fame.  “I’m surprised by this award.  I’ve always felt the kids have done all the work for me and I was there to guide them.  For me, this is an honor and such a great feeling to have such support from my swimmers, their families, and the community,” said O’Connor.