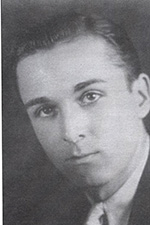 Opponents feared him.  Coaches praised him. The Branford community worshiped him. A major contributor to Branford athletics during the late 1920’s and early 1930’s, 1999 Branford Sports Hall of Fame inductee John “Jack” Salvin  was a mainstay as a center on several basketball teams and  as a lineman while competing on the gridiron.

Born on December 25th, 1915 in Branford, Jack was a lifelong resident in the town and attended Branford schools, including Branford High School from 1929 to 1933. While there, he played basketball for 4 years and was the center on the team during his last two years when they compiled a 21-14 record.  As a freshman, Jack was part of the Hornets basketball squad which won the state championship in the Class C division and a runner-up position in the Housatonic League in the 1929-30 season. That year, Branford held a 14 – 3 record. In the state tournament, the Hornets defeated Woodbury (26-19), Madison (23-16), and in the title game, crushed Putnam( 32-6).

For three years, he played football for the Branford High School squad as a defensive and offensive lineman.  In the 1930-31 season, Jack was part of a banner team which won eight consecutive games after losing its first game of the season and took home a Housatonic League championship. The following year, Branford made history with one of its finest seasons ever in the town’s history. Determined to follow in the footsteps of 1930, they captured the Housatonic League championship and were crowned the State Class “B” Champions.  This team was the only unscored upon and undefeated team in the state.

Following high school, Jack continued to play and star for a variety of semi-pro basketball teams and was part of several Industrial league crowns including back to back titles in 1936 and 1937 when M.I.F. won the Divisional A Industrial League.

Starting in the late 1930’s, Jack began playing fast pitch softball for the Sportsman Tavern, which won several community titles.  After his playing days, he served the youth of Branford as a coach and organizer of youth leagues.  In 1951, the Branford Little League was formed and Jack helped organize the structure that still exists today. He coached the Branford Vets to league titles in 1955 and coached the Pony League All Stars to the New England Championship. Later, Jack helped start the first Biddy Basketball League. In 1956, Jack and another Hall of Fame inductee, Ray Orsini (1991), started the very successful St. Mary’s CYO basketball team, which they coached and led to numerous titles.

Jack was an employee at the Malleable Iron Fittings Company from 1934 to 1970, serving as a foreman and supervisor.  From 1970 to 1985, he worked as a maintenance man and custodian for the Branford School System.   He made other contributions to Branford, serving as a volunteer fireman with M.P. Rice Hose Company and as clerk and borough treasurer during the 1960’s.

Sadly, Jack passed away on June 20th, 1999 at the age of 83.  He is survived by his wife of almost sixty years, the former Josephine C. Sokolosky, his three children, Mike, Thomas, and Evaleen and two grandchildren, Amy and Daniel.