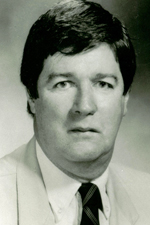 For those who witnessed 1992 Branford Sports Hall of Fame inductee John H. McGowan excel in baseball and basketball both in high school and college, the question most frequently asked by many revolved around which sport was he most successful playing.  By looking at the achievements bestowed upon him, one could assume that John H. McGowan was truly a great two sport athlete.

While attending Branford High School, John was a pivotal part of the basketball and baseball programs.  In his sophomore and junior year, the basketball team reached the semi finals of the C.I.A.C. tournament in both cases losing to other Housatonic League teams, Shelton and East Haven respectively.  In his senior season, McGowan had several big games for the Hornets Basketball team.  One such game included a 58-47 upset win against a tough Shelton Gaels team.  At that time, home games were played at the Branford Armory and it was there that a crowd of 500 fans saw the Hornets break a 22-22 tie at the end of the third quarter and rally behind McGowan’s 20 points to clinch the victory.  In previous a Branford win, a 56-44 decision over Staples, McGowan broke the school scoring record of 34 points by netting 35 points.  During the baseball season, McGowan batted over .600 and did not strike out once all season – a remarkable feat achieved by few.

After graduating as one of Branford’s top three students academically, in 1954, McGowan played for the Branford Townies baseball team which won the Shoreline League as John won the league’s batting title with a .476 average.  In the fall of 1954, McGowan entered Trinity College where he continued to play basketball and baseball while being tabbed captain of both sports.  While playing varsity basketball, McGowan averaged 20 points per game, including a 29 point effort against M.I.T.  As a member of the varsity baseball team, John played centerfield and batted over .300.  In his sophomore year with the team, McGowan led Trinity to a 20-0 record and received an invitation to the NCAA Tournament but due to college finals, the school has to decline the opportunity.

Upon graduation from Trinity, McGowan signed a baseball contract with the Baltimore Orioles organization and played in their minor league system from 1959 through 1962, advancing to the club’s second highest level.  In 1960, the Orioles minor league team won the Three-I league by a record margin of 15 games.  McGowan played in every inning of every game on a team which was managed by legendary Earl Weaver and had such future major league stars as Boog Powell, Dean Chance and Steve Barber.  In 1962, McGowan led the Orioles minor league affiliates in the Florida State League in home runs and rbi’s.

Married to the former Susan Heck of East Haven, John is the father of five children Kay, John, Kerry, Liam, and Daniel.  John is the son of the late John A. McGowan and Margaret Purcell and nephew of two Branford Sports Hall of Famer’s, 1989 inductee Frank B. McGowan and 1991 inductee Joe Purcell.

“I think this is one of the most important things to me because I have always lived in Branford.  Because I’m in with people who I have watched and played, people who I’ve admired, people who my father always praised, people who have coached me, it’s just a big thrill to be part of the group,” said McGowan.