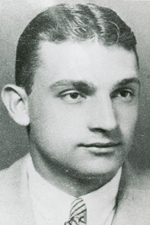 Branford High’s first full-time coach and athletic director put a heraldic stamp on Branford’s ability to produce top flight. Co-incident with the completing of the new school on Eades Street, a wide search by Superintendent of School Horace G. Westcott to hire the right man produced John E. Knecht, a fresh graduate out of Springfield College in 1929.

At the school noted for its preparation of coaches, the West Havener, born in East Haven, was a 10 strike. At West Haven in the days of the fabled Ken Strong, slightly built but wiry and wily, John was a guard on the first West Haven High School team to reach the semi-finals of the state basketball tournament (1925) and deserted the shadows of Savin Rock to attain first team status in basketball and lacrosse at Springfield.

His success was immediate and lasting. In his first year of coaching, he turned the town’s athletic fortunes about and won the Class C basketball championship, placing three of his athletes on the tournament team.

He went on to produce three Housatonic League championships in football and added six state championships to his first basketball title. Although his baseball knowledge was short of experience, he added one baseball diadem to the production.

Overall, his teams won six Class B titles on the court and once, over a three year span, his clubs strung together a skein of 37 victories. In another remarkable feat, his football team of 1931 went undefeated and unscored upon although it was tied 0-0 in its finale against Roger Ludlowe of Fairfield.

Overall, he coached at Branford for 14 years, abdicating his coaching role on a scholastic level to become Director of Personnel at the Malleable Iron Fittings Co. of this town. There he produced the M.I.F. basketball champions of State and New Haven Industrial fame. With the conclusion of the Second World War, he coached the colorful Branford Veterans quintet to brilliant success, defeating many of the state’s top professional teams with a nucleus of his former schoolboys.

His quiet personality projected him into many offices of the New Haven County Board of Officials. In his retirement years, the husband of Elinor Stribey (1931) and father of sons Robert and John Edward III served Branford as an assistant director of the Recreation Dept. under Joe Trapasso where he was instrumental in helping with the programs for the handicapped. He died in 1975 and seven years later had his name inscribed in the annuals of the Connecticut High School Association’s Hall of Fame.