Inductees by YearJohn B. Sliney 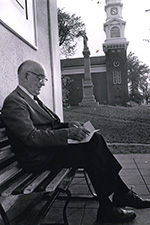 Allegiance.  Dedication.  Devotion.  Unselfishness.  These remarkable traits were best exemplified by a civic giant and athlete in the form of 2003 Branford Sports Hall of Fame inductee John B. Sliney.

Born in Branford on April 6, 1897, John was the son of John T. and Hannah Buckley Sliney, who were also lifelong residents of the town.  He attended Branford High School from 1912 to 1915 where he was a two sport athlete in baseball (as a second baseman) and basketball. He was a right fielder for the “Hustlers”, Branford’s town team.  Despite his involvement in those two sports, horses were his main focus and passion in the field of athleticism.  He maintained a horse stable most of his life and provided encouragement and training for locals who performed in horse shows throughout Southern New England and New York, most notably in Madison Square Garden.  If a Branford youngster was interested in learning to ride, John provided the opportunity.    He trained many to become accomplished riders who more than held their own in big time competition.  After high school, he attended Catholic University for a year before returning to Branford to help in the family livery business in addition to the contracting and coal industry.  John was a World War I veteran and was selected to attend Officers Training School.

In 1929, he became involved in Education and was active in building the present Eades Street School.  Shortly after, John was elected to the Board of Education at the age of 21, which he proudly served on for 40 years.  During that tenure in office, he was involved in building the Indian Neck, Short Beach, Branford Hill, Pine Orchard, Mary Tisko, and Mary Murphy Schools.

In 1963, tonight’s inductee was elected First Selectman for the town of Branford, a position he held for 18 years. During his tenure, he acquired 350 acre Supply Pond, 405 acre Stony Creek Quarry, 50 acre Young’s Pond and 52 acre Brushy Plain Road, expanded Branford High School and built the junior high school now known as the Francis Walsh Intermediate School.  John was the chairman of the committee to build the Branford Community House.  In 1976, the John B. Sliney Park was dedicated “in appreciation of his vision and dedication to the community” and in 1979, the Eades Street School was named in his honor.

Civically, John was active in the MP Rice Volunteer Fire Department and chairman of the World War II Rationing Board.

Sadly, John passed away on April 3, 1981 at the age of 84.  He was married to the former Teresa Hall and was the father to daughter, Betty Ann Sliney Trapasso and son, John Tom Sliney, and grandfather of six.  Tonight he joins the Branford Sports Hall of Fame with fellow inductees form the class of 1988 and son-in-law, Joe Trapasso.