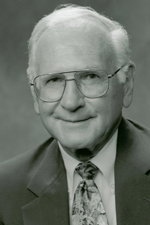 Every exploration which 1995 Branford Sports Hall of Fame inductee Joe Vancisin participated in resulted with the same ending – success.  As a high school and collegiate athlete, an accomplished coach, or as a member of the United State Air force, tonight’s honoree maintained a high level of consistency in the workplace and on the athletic battlefield and autographed his accomplishments in a way which many could use as a facsimile today.

Born in Bridgeport on June 4, 1922, Joe attended Bassick High School, where he played and lettered in basketball and baseball in 1939 and 1940.  In his senior season, tonight’s honoree was the captain of the state and New England Championship team as well as being selected to the All State and All New England High school teams in addition to being recognized as the Outstanding High School Player in the state of Connecticut.

After graduating from Bassick High School in 1940, he attended Dartmouth College, where he played basketball and baseball.  He was selected captain of the Dartmouth Freshman Basketball Team and lettered in both basketball an baseball during the 1940 and 1944 seasons, and sat out his sophomore and junior year seasons due to illness.  Joe was the starting guard on the Dartmouth Eastern Intercollegiate Championship Team in 1944 and played on the runner-up NCAA team which lost to Utah 44-42 in overtime.

Following his graduation from Dartmouth College in 1944 with a Bachelor of Arts degree, he began coaching basketball in the service and with several teams in the Big Ten Conference and in the Ivy League.  Following his coaching apprenticeship with the Dartmouth freshman team in 1945, Vancisin was stationed in Washington, D.C. as a Corporal for the United States Airforce-Strategic Air Command Basketball Championship before he moved on to collegiate coaching.  Joe assisted the University of Michigan basketball team in 1948 to a Big Ten Championship and spent the next seven seasons (1949 to 1956) with the University of Minnesota basketball program and received his Masters of Arts in Education in 1955.  He aided the Golden Gophers to a Big Ten and NCAA baseball championship in 1955 before his move to Yale University as head coach of the Bulldogs hoop team for 19 years from 1956 to 1975.  During his tenure, Vancisin’s squad won two Ivy League championships during the 1956-57 season and the 1962-63 season.  He claimed 207 victories while at Yale.  As the freshman gold coach at Yale University for 14 seasons, he claimed a record of 72-25-1.  For his basketball accomplishments, Joe earned a spot on the 1976 Olympic Gold Medal Winning Basketball Staff with legendary University of North Carolina coach Dean Smith in 1976 and a member of the Olympic Staff in 1980.

Since the late 1960’s, tonight’s inductee embarked his executive career on several committees including the Board of Directors of the National Association of Basketball Coaches, as President of the association in 1974 and as Executive director for 17 years.  Joe has also been a trustee of the Naismith Basketball Hall of Fame from 1970 and 1992 and served on the USA Basketball Committee from 1975 to 1992.

Married to the former Elizabeth Ann Butler, father of children, Richard and Susan, and grandfather to Christopher and Dana Vancisin and Rebecca Miller, Vancisin is delighted to enter tonight’s Hall of Fame.  “This award mean a lot to me.  I’m startled.  When I left the state of Connecticut, I felt out of sight, out of mind.  Being recognized in your hometown is very important and I feel honored,” said Vancisin.