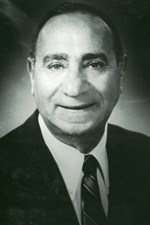 It is doubtful that no one person has ever done more to promote Branford’s good name throughout the nation than has our Superintendent of Recreation, Joe M. Trapasso.

He came, almost as a carpet-bagger, to our town intending to accumulate experience in the field of recreation and then move on to the lusher fields where the recompense would be more in keeping with his lofty aspirations.

From his introduction here in 1951, he found a cooperativeness that makes this hamlet unique. It was a monumental task he undertook for he had to build on his dreams a new capacity for all forms of entertainment, not alone on athletics heretofore haphazardly organized.

It was Trapasso’s zest for challenges that persuaded the members of the Recreation Commission to hire him. Joe called upon his experiences in recreation and special services in the Pacific Theatre of War in World War II and subsequent training in Ossining, N.Y., to create a program here that is second to none in the nation. He did it with a dedication to his own ideal: be realistic – demand the impossible.

Magically, he drew from all types with the boundaries of Branford, a new enthusiasm. From his endorsers on the commission, he found cooperation for projects. In his early stages, coats of new paint on old equipment projected a new era of pride for the talents within the town. Even as he accepted the plaudits of those about him, he projected his visions of unparalleled horizons for his adopted town.

Each district within Branford found new fields, physical and cultural, for the use of its inhabitants.  He made allies of the doubters and recognition for his “impossible dreams” followed.

He found officials within the retired, participants from all walks for his programs as he embraced the fields of arts, music, drama, sports, dancing, playground activities on all levels.

Joe’s expertise has led to recognition that extends to the boundaries of this nation. His enthusiasm is repeated in the trainees that are now spreading his creed in all directions.

After thirty-eight years, our director did accomplish that which was thought impossible. In a unique way, he demonstrated that he was realistic – he found fertile fields in Branford and, though enticements were far richer elsewhere, our dynamic man remained in the town he grew to love.