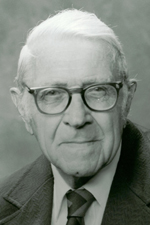 During the 1930’s and 1940’s, this individual’s presence sent horror and fear into the many opponents who dared face him.  A tall, talented center in basketball, a formidable pitcher and first baseman in softball and baseball, and a high roller in bowling, 1995 Branford Sports Hall of Famer Joe Resjan accomplished many high-mark achievements to bring pride and distinction to his hometown.

Born in Branford on January 20, 1913, Joe attended Branford High School from 1927 to 1930.  While there, he was known for his height.  He represented the Hornets well on the basketball team during his senior season.  In that year of 1930, the varsity basketball team won the State Championship (Class C) and was awarded runners up in the Housatonic League.  Coached by 1988 Branford Sports Hall of Famer, the legendary John Knecht Jr. and teammates of other Hall of Famers including captain Dominick “Mink” Swirsky (1990), Harry “Heb” Williams (1990), Paul Pauk (1991), and Joe Russell (1991), he aided the basketball team to a 14-3 record, including wins in 10 of its 11 games, some of which were victories in the Storrs Tournament against Woodbury (26-19), Madison (23-19) and Putnam (32-6).  For the season, Branford outscored its opponents 362 to 255.

After graduating from Branford High School in 1930, Joe found employment with the National Biscuit Company for 20 years as a delivery man and as a foreman in the shipping and receiving departments.  He was also part of the M.P. Rice Hose Company for 50 years.  While in the United States Army from 1942 to 1946, he played softball and basketball at Fort Devens (Ayer, Massachusetts.)  In July of 1944, Resjan’s Post softball team, deemed New Station Hospital, competed for the league title against Lovell General Hospital.  Away for reconditioning at Camp Frant, Illinois, Joe came back to help lift New Station over Lovell General 3-1 and capture the softball championship.  In the game, he collected three hits, scored a run and was the winning pitcher.  Later, in 1945, Resjan was awarded a spot on an all-star softball team, which captured yet another crown as he pitched his team to victory and scored one of the runs in a four run sixth inning handling Resjan’s All-Star the win 4-3.

Tonight’s inductee played in many recreational basketball, baseball and softball leagues.  In softball, Joe played on the Sportsmen Tavern team which won a league title, along with the Croation Fraternal Union team, the M.P. Rice Hose Company and in the Shore Line Summer League.  On the hardwood, he participated on such teams like Branford Alumni, Croation Fraternal Union and the East Haven Jeffs.  Along with 1993 Branford Sports Hall of Famer Chet Tisko, Joe was part of seven consecutive bowling championship teams in the New Haven Big Pin League from 1950 to 1956.  Resjan’s team rolled an 1154 series which was an association record until 1970 for the Branford Combers, as they were called.

Married to the former Betty Blackstone for 36 years, Joe enters tonight’s Branford Sports Hall of Fame with dignity.  “This award means a lot to me.  It is a great honor to be mentioned in the same breathe with those already honored who I played with and against.  To be recognized in sports, in the town of Branford, and with such great athletes is certainly an honor for me,” said Resjan.