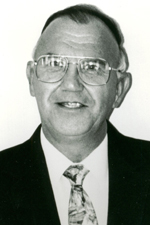 Seek truth and one will find satisfaction.  Recognize dedication and stability soon follows.  Find professionalism and success becomes the results.  Each one of these values revealed the kind of person and athlete 1993 Branford Sports Hall of Fame inductee Joe Paul is and was throughout his career at Branford High School, the University of Notre Dame and St. Petersburg Catholic High School.

While at Branford, Paul lettered all four years in three sports: football, basketball and baseball.  He was honored by the New Haven Register by being Elected to the 1st Team All-State in basketball in 1952 and 1953 and All-State in football in 1952.  He played on the basketball squad during the 1950-51 season and followed teammate Lou Locarno in points with 285.  The Hornets finished with a 14-5 record, which resulted in a share of the league title.

In 1952, Paul’s football season was highlighted in the biggest game of the season versus archrival East Haven.  In the contest, Branford managed to complete one pass, a 22 yard touchdown spiral from quarterback Bob Mason to Joe Paul that ended East Haven’s unscored upon streak and gave Branford a 7-6 win.  With 1992 Branford Sports Hall of Fame inductee Warren Sampson as his coach in baseball, basketball and football, Joe was the hoops squad leader in points with 249.

In Joe’s senior season, he was selected to the Class B all-tournament team that year and was named “Most Athletic” in his class.

After graduating from Branford High School, Joe attended the university of Notre Dame on a football scholarship which lasted until his sophomore year when a knee injury removed him from football competition.  He graduated from the University of Notre Dame with a Bachelor of Science Degree in Physical Education and minored in Science and was commissioned Second Lieutenant in the United States Army Armor Division in 1957.  He served six months active duty and was placed on seven years active reserve.  He was then awarded a teaching fellowship at Notre Dame and earned his Master of Arts degree in educational administration in 1959.

In 1986, after twenty eight years of administration, coaching and teaching service, Joe was honored by having the high school stadium renamed from St. Petersburg Catholic Stadium to the Joseph W. Paul Stadium and later served as the school’s athletic director.

Being inducted into the Branford Sports Hall of Fame is not only an honor for me but for my family.  In a way, it shows all the time, effort, and faith Coach Warren Sampson had in me has come to fulfillment,” said Paul.