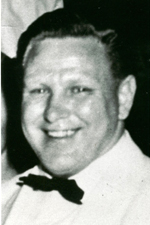 It has been said that you measure a man in many ways: his compassion, the size of his heart, the depth of his feelings.  Now it can be written that 1993 Branford Sports Hall of Fame inductee Joe “Butch” Naimo succeeded in everything which he accomplished through these facilities.

A well-known Branford athlete, Naimo enjoyed tremendous fortune while a student at Branford High School, an athlete in three sports: baseball, basketball, and football.  As an end on the Hornets football team, Naimo was elected to the All Housatonic Valley League 1936 football team, picked exclusively by the Milford news at the time.  Playing for 1988 Branford Sports Hall of Fame inductee Coach Johnny Knecht Jr., Naimo was considered as a heads-up player whose defensive strength and qualities of leadership turned the balance in his favor.  As Knecht molded his team,  Naimo was relied upon to have the power to inspire his teammates in working hard.  During the 1938 season, work diligently they did.  That year, the football squad gained second place in the Housantonic League valley conference after a successful season.  The Hornets, with Naimo as a left end, dropped but one league game during the season while other losses were due to larger Class “A” schools.  During that year, Branford trounced rivals Shelton (19-0) and Milford (20-6) as well as getting by Stratford (7-0).

In the 1938 Milestone Yearbook, it is stated that “Butchie” Naimo is the boy whose talent may be seen on the basketball court.  His ability to make baskets and bring up the score for Branford High School is outstanding.”  True to form was the achievement of the 1937-38 basketball squad with Naimo, and fellow inductee Steve Hylinski.  It was with this team that the Hornets turned in one of the most unforgettable records of any team in the history of Branford High School.  Under Coach John Knecht, Branford captured an undefeated record in Connecticut, the only one of its kind.  During that season, Naimo led the squad against one of its hardest opponents – Hillhouse.  In its second meeting with them Naimo scored a game high 17 points, helping Branford to a 37-31 win before one of the largest crowds to attend a basketball game at the Branford Armory.  The 1938 squad set many records including winning its fourth straight State Championship in Class “B” and for the first time becoming an undefeated winner, winning twenty-one straight.  Naimo also took first place honors in the Housatonic League scoring averages by recording a 14 game, 57 basket, 144 point performance as the season came to its fantastic finish.  Branford defeated East Haven (30-16), Plainville (53-28) and Windsor (37-18) for the title.  Naimo was also named an All-Stater for his play on the hardwood floor.

Naimo also had the opportunity to play baseball with Hylinski and fellow inductee John Yusievicz before being approached by the Boston Red Sox and St. Louis Cardinals as a big league pitcher.  He also played with a the local Townie team and the Branford Rams football team before he passed away at the age of 35.