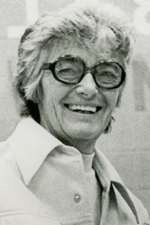 When visiting recreation directors take one look at the Branford Recreation Department, they marvel at the maintenance of the building and the numerous programs offered under the direction of Joe Trapasso. Another key influence to the presence of the Branford Community House was none other this 1991 inductee to the Branford Sports Hall of Fame – Joan Bradley.

Starting in 1951, Joan assisted Branford Recreation director Joe Trapasso in setting up the Branford Summer Playground Program which still is successful today well into its 40th year. In that same year, Bradley set up and organized Outdoor Block Dances and the famous Teenage Dances following the Branford High School Basketball Games. Along with Trapasso and Dom Giordano, Bradley helped set up After Prom parties for the Branford High School graduating class. When the first Frank J. Kinney Basketball Tournament began in the same year, Joan assisted and organized the month long tournament. Continuing her love for basketball and children, Joan aided “Joe T.” in the make up of the Annual Joan G. Bradley Girls Invitational Basketball Tournament going into its 19th consecutive year of existence. In appreciation for the game of softball, Bradley assisted in the ever so popular Carl “Hop” Nuzzo Softball Tournament held at the end of the regular softball season.

Striving to improve the town’s recreation department in any way she could, Joan was a key member in building the new Recreation Department and became involved in the fund raising aspect of the project. Later, she offered her input to the construction of Veterans Memorial Park at Brushy Plains. As Chair Lady for the Recreation Department, Joan was in charge of food concessions at the Frank J. Kinney Basketball Court in the old community house. Joan also set up and conducted girls softball, basketball, swimming, golf, and volleyball programs before serving on the Board of Recreation and later as Chairman of that board for several years.

For her outstanding accomplishments, Joan was honored by the National Park and Recreation Association of Washington, D.C., for her devoted years of service to the Branford  Recreation Department and to the renaissance of recreation in the 1950’s.

Joan married fellow inductee Bob Bradley in 1946 and had two sons, Bob and Guy, before she passed away in 1987.

“She did a lot of volunteer work at the old community house and was involved with several activities there. She thought a lot of Joe and (Assistant Director) Alex Palluzzi, Jr., and they had a great relationship throughout the whole time,” said Bob Bradley.

“She would be very humble and modest about her induction into the Branford Sports Hall of Fame. She would probably say she didn’t deserve it, but she would cherish it – I know.”