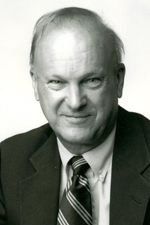 Consistency, Reliability, and Dedication has always revolved around the life and work ethic of 1996 Branford Sports Hall of Fame inductee Jim MacVeigh as a scholar-athlete in high school and college, as a serviceman in the United States, and as a teacher at Branford High School.  Add to that his genuine concern for all students he comes in contact with, and his passion to report the accomplishments of all Branford athletes, and his constant personable demeanor, Jim joins an elite group of educators who has brought pride, honor and distinction to this town.

Born on January 4th, 1940 and raised in West Haven, Jim attended West Haven High School, where he lettered in soccer and track in addition to being an Eagle Boy Scout.  After graduating high school in 1958, he attended the University of Connecticut and was a varsity letter winner as a sophomore in soccer.  After high school, Jim signed up to serve in the United States Marine Corps for three years and was stationed at Paris Island, South Carolina, San Diego, California, and Camp Lejune, North Carolina.  He returned to Southern Connecticut State University after military service to receive his Bachelor of Science degree in History and minor in Psychology and Secondary Education.  Jim received his Master of Arts degree in History at Trinity College and his Sixth Year Administration and Supervision Degree at Southern Connecticut State University.

Jim began teaching at Branford High School in the Fall of 1969, when he was hired by George Mishler.  He assisted Paul Rowan with the Boys Soccer program at Branford High School as a Junior Varsity Coach and as an Assistant Varsity Coach.  His J.V. team had a number of undefeated seasons, and he was part of the 1970-71 State Quarter Finals Team which finished with a 9-3 record and the 1974-75 Housatonic League Championship Team.  In 1978, Jim coached Branford to the Connecticut Indoor Junior Championship at the U.S. Coast Guard Academy.  For his devotion to the community and to his students, tonight’s inductee was voted Teacher of the Year in 1969 and was chosen to be the Graduation Speaker for the Class of 1993 and the Class of 1996.  A former soccer and tennis player at Branford High School in the class of 1981, Randy Seidel, helped set up the Jim MacVeigh Scholarship Award, which is an award that goes to a student that works diligently behind the scenes in some capacity yet goes unnoticed.

Tonight’s inductee is perhaps best known as being a Sports Writer/Sports Columnist for the Branford Review.  Jim wrote his first sports article for the Review on October 26, 1972 and became a Sports Columnist with his ever popular “Sport Shorts” on December 30, 1976, linking the community together with all honors and attributions bestowed upon the athletes at Branford High School, which he still does today.  Since his career in Sports Journalism took fruition, Jim has reported on and witnessed 30 Housatonic League titles and 20 State Titles earned by the athletes at Branford High School.

Jim has also taken on the role of “re-creator” as he restarted intramural basketball at Branford High School, which has grown from two teams to eleven teams in eight years and as statistician for both the football and boys basketball teams since 1970.

Married to his wife, Karen, Jim is proud to accept induction tonight into the Branford Sports Hall of Fame.  “It’s wonderful to be appreciated and honored for things you have loved doing for the past 25 years,” said MacVeigh.