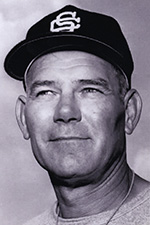 “For bringing honor and distinction to the town of Branford” has been the motto for the Branford Sports Hall of Fame since its inception in 1988.  Continuing to share in a trademark of excellence is a man who gave himself unselfishly as an athlete, a coach, an athletic administrator and as a Navy Veteran – 2003 Hall of Fame inductee Jess Dow.

Tonight’s inductee, a native of Tona, Texas attended Littlefield Texas High School from 1930 to 1934 and later when to West Texas State University where he was named a Little All-American fullback in 1937.  He joined the Southern Connecticut State University faculty in 1946 when there were just 25 men enrolled in the intercollegiate athletic program.  He established the intercollegiate football program, for which he is best known, in 1948, and later became one of the nations’ most successful football coaches.

After winning the Eastern Football Conference title and being named coach of the year in the EFC in 1965, the league’s inaugural season, Jess retired as coach to devote full-time duties as director of athletes, a position he held until retirement in 1975.

Jess completed his career as the winningest college division coach in New England with a 108-40-6 record for a winning percentage of .730. Tonight’s inductee was selected coach of the year in 1950 and 1953 by the Connecticut Sports Writers’ Alliance. In 1962, Jess was voted to the Helms Hall of Fame as Football Coach in 1962. The Alliance also honored him with the coveted Gold Key following his retirement from coaching.  Jess also received one of the nation’s highest honors athletically when he was inducted into the NAIA Hall of Fame for his contributions to college athletics.

Jess was a professor emeritus of Health and Physical Education and also guided Southern’s teams in basketball, baseball, track and golf in his 28 year career.  He had an outstanding record as Sothern’s golf coach with a 49-23 over his final six seasons.

Dow joined the Philadelphia Eagles of the National Football League for three seasons following his graduation.

He was a great friend to former Recreation Director and Hall of Fame inductee, Joe Trapasso (’88), serving on the early Branford Recreation boards.  He also was actively involved in the Rotary International and Masonic Lodge.

Sadly, Jess passed away on March 24, 2003 at the age of 86. He was predeceased by his first wife, Arneta and was the father to son, Robert and daughter, Jane Anne.