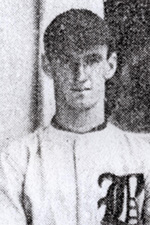 During the early 1930’s, opponents of the Branford High School baseball team fell victim to a tenacious, gritty, left handed pitcher every third or fourth day in the form of 2001 Branford Sports Hall of Fame Jerry Carden.

Tonight’s inductee attended Branford High School from 1930 to 1933, where he was a member of the Hornets baseball team.  Jerry led Branford to two consecutive back to back Housatonic League championships in 1931 and 1932.  During his junior year, Jerry pitched quite well and held a high winning percentage overall for starting pitchers.  Branford opened its league schedule in Wallingford, winning, 5-3 and in the game, Jerry struck out 19 batters.   He later fanned 15 vs. Shelton High School in a 3-2 victory.  He holds or held numerous records in most strikeouts, most shutouts and most no-hitters in Branford High School history.

Following graduation, Jerry continued to play baseball for the Branford Townies under fellow Branford Sports Hall of Famers, Frank Kinney Sr. (’88), Stu Clancy (’89),  and Harry Brazeau (’94).  He recorded several impressive pitching performances while a member of the team.  In his first start  in the Middlesex League, he threw his first no-hitter.  Against Middletown, Jerry yielded two runs and two hits in a 7-2 win and later in the season, vs. Portland, held them from a late rally in a 5-4 victory, which gave the Townies first place in league play.  Against East Hampton, the lanky left handed pitcher struck out  nine opponents, while giving up three runs and three hits en route to a 4-3 decision.

As he was being looked upon as an excellent pitching prospect  by the Cape Cod League, Jerry had one of  his finer performances against Middletown as he struck out 15  on a two hit shut-out victory, 5-0.  He countered that game with a no hit, 10 strikeout bid, against Portland, winning by the final of 6-0.   During this time, major league scouts from the Philadelphia Athletics  took a look at Jerry for professional contention.  The Townies won the Middlesex County League pennant, beating Meriden,  while tonight’s inductee pitched a three hitter to seal the title.  In 1933, against Portland, he threw another no-hit game prior to a key match-up against rival Middletown, which Branford defeated 15-3.  Jerry pitched three innings of relief, struck out seven, walked one and gave up one hit.

Jerry later played for the East Haven All-Stars in a game which raised money and benefited 2000 Branford Sports Hall of Fame inductee Michael “Mickey” Thomas, who suffered a career ending broken leg in a Townie baseball game.  Jerry played  on the same team with another inductee Charlie Jones (’90).   He was captain elect for the Branford Hammers of the East Shore Middlesex League and had two singles as the starting shortstop.

In addition to playing baseball, Jerry held a great ability in the boxing ring.  He made his ring debut at Savin Rock and was featured in a three round benefit in East Haven as an amateur middleweight and totaled over 30 carded amateur bouts throughout his career.

Sadly in March of 1961, Jerry passed away at the age of 43.  He was married to his wife, Theresa,  and was the father to Peter and the grandfather of Terri, Gerald, Jennifer (Egan), Danielle (Ramcke), Sondra, and Peter.