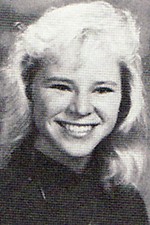 Although 2008 Branford Sports Hall of Fame inductee Jennifer Lincoln Toomey demonstrated her talents on the high school swim team, it was her serious competitive running which resulted in her exceptional success later in her career and has earned her entry into the Hall of Fame.

A 1989 graduate of Branford High School, Jennifer was a two sport athlete in swimming and track. In 1987, she was a member of the all-state runner-up swim team. With a record of 9-2, the Hornets swam to a second place finish in the Housatonic League. A particular memorable victory for the Hornets came against Glastonbury. Branford was behind throughout the meet up until the diving. That’s when Jennifer and the Hornets turned it on and pulled away with the win. Thanks to hard work and perseverance, the Hornets were able to place a strong second in the Class “M” Swimming Championships. For her efforts, Jennifer was named to the All-State team.  As a tri-captain in her senior year with Kelly Maher and Alicia Grenon, tonight’s inductee led the girls swim team to a 9-1 record, defeating Sheehan (122-45), Seymour (84-71), Lyman Hall (118-43), Weston (87.5-78.5), East Haven (122-61), Hamden (100-72), North Haven (104-65), Glastonbury (100-70), and Amity (100-72), and capturing its first state title in the Class “M” meet. Jennifer received All-American consideration for her diving and was selected to the All-State team.   She showed promise on the track team as a high school freshman, qualifying for the Connecticut state final in the 400m.

Following graduation, this inductee attended Tufts University, where she earned All-American status for diving.  Competitive running appeared on Toomey’s radar in 1997 when she joined the Boston Running Club for social reasons but the experience transformed her into more of a competitive participant.  Her accolades in track include  being featured in Sports Illustrated and appearing on the cover of Runner’s World.

Over a two-week period during the 2003-04 indoor track season, Jennifer became the first American runner ever to win the 800 and 1500 meter events at the United States Indoor Championships and finished fourth in the 800 at the World Indoor Championships in Budapest, Hungary.  Jennifer won the 1,500 indoor title again in 2005.  She also qualified second in the United States Olympic trials, and broke a national indoor record.  After amassing a collection of second and third place finishes, she won at the Adidas Boston Indoor Games. Finishing second in the 1,000 meters at the Norwich Union Grand Prix in Birmingham, England and breaking the American Record by more than a second with a time of 2:34.19, Jennifer surpassed all expectations in front of her hometown crowd at the USA Indoor Track and Field Championship in Salem, Massachusetts. Toomey won the 800 meters with a time of 2:00.02 and ran away with the 1,500m title (4:09.82) to become the first athlete in meet history to complete the middle-distance double.

Currently, Jennifer and her husband, Michael, a former state mile champion at Lynn English and an All-American runner at the University of Massachusetts-Lowell, live in Salem, Massachusetts.