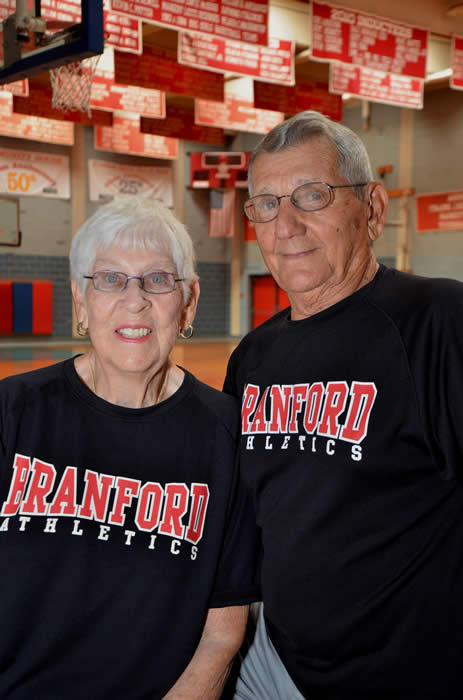 J. Palluzzi is a graduate of Sao Paulo Graded School in Brazil. She received the first of several degrees from what was then Southern Connecticut State College in 1955, and Masters as a reading consultant and 6th-year degrees in ESOL (English as a Second Language) and Special Education from SCSU as well.

While an undergraduate, J. was played basketball, field hockey, volleyball, tennis and swimming, but her claim to fame was playing on the 1954 undefeated women’s basketball team that beat the University of Connecticut. A member of the Athletic Association, she earned the coveted Athletic Jacket in recognition of her commitment and athletic skills.

She began what was to be a 37-1/2-year teaching career in Guilford, and, after raising her four sons, she returned to teaching when the Branford Intermediate School opened in 1971. She then taught at Branford High School and retired from Branford Elementary Schools retiring in 2005 when she was inducted into the Education Hall Of Fame. A pioneer in teaching ESOL (English As A Second Language), her focus was in preparing students in reading. She continues to run the Annual Branford Spelling Bee as she has for over 35 years.

J passed on her love of athletics and the joy of competition to her sons, Alex (Branford Sports Hall of Fame alum, Class of 2013), John “Jake” (class of 2007), Michael and Tony, each an accomplished member of Branford High School athletic teams. J. and her husband, Alex Sr., are fixtures at Branford sporting and cultural events, encouraging, supporting and appreciating the efforts of all. Their passion and love for the game have assisted many student athletes in the community. J. can be found these days with a pen and pad in hand tracking statistics for her 10 grandchildren, and the game at hand.

Alex Sr. was the middle sibling of four sisters born to Italian immigrants Antonio and Bella Palluzzi. After Antonio migrated to the United States at Ellis Island, N.Y., in 1918, he settled in North Branford and began a career that spanned more than 50 years at the Tilcon-Tomaso Company (formerly New Haven Trap Rock, North Branford).

After attending trade school and Hillhouse High in New Haven, tonight’s inductee followed in his father’s footsteps to Tilcon, retiring as foreman of the asphalt division in 1990 after 40 years. For over a decade, he coached all four of his sons, along with Augustine Perrotti, with the Atlantic Wire Company team. They were considered one of the most successful teams in the late 1960s to mid-70s. He also assisted with coaching the undefeated New England championship St. Mary Grammar school basketball team in 1972-73.

Alex Sr. is a proud veteran of the Korean War. He served our country as a medical aide and chaplain assistant from 1951-1954. He was honorably discharged as a Sargent and received three battle stars during his duty. He also received the State of Connecticut Public Service Award in 2010. Alex Sr. played baseball in the Army, and when he returned from duty, played sandlot baseball as a centerfielder for the Branford Townies and North Branford Baseball Teams. He has been an active member of the Branford Lions Club for 30 years, serving on many committees and the board. Alex is a Melvin Jones Fellowship Award winner and also received the Humanitarian Service Award from the Branford and Connecticut Lions, respectively. Tonight’s inductee has also been attending ball games for his sons and grandchildren for over 50 years. He is an avid golfer who loves to play with his friends, but especially with his four sons and grandson Dylan.

Alex and J. were married on July 16, 1955, and recently celebrated their 60th wedding anniversary. In addition to their four sons, they are the proud grandparents of 10: Megan, Dylan, Emma, Jenny, Jakee, Nikki, Jenny, Mikey, Lily and Anthony. Tonight’s inductees are also the proud great-grandparents of Theo, who just celebrated his first birthday.