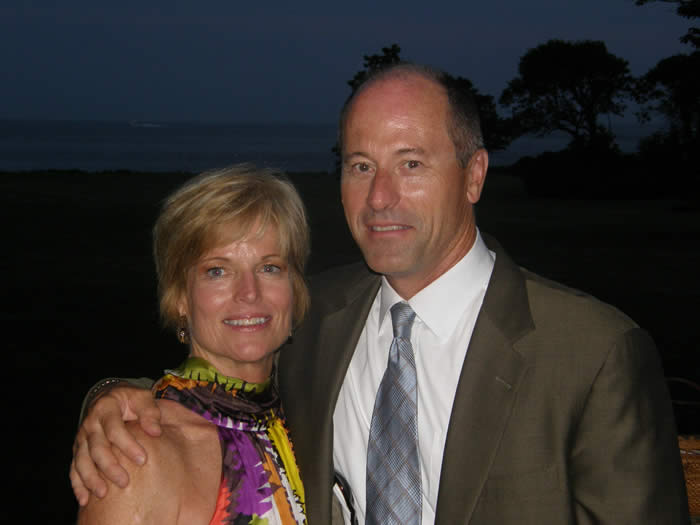 Jean and Jack Kelley had impressive high school and intercollegiate athletic careers. Dr. Jack Kelley, a highly respected orthopaedic surgeon and author, continues to volunteer orthopaedic medical service to local high schools. Jean Kelley, a trained educator and triathlon athlete, is well-known for her tremendous, volunteer fundraising efforts for the Myelin Project. The Kelleys have contributed significantly to the philanthropic and athletic culture of the Branford community.

Jean Kelley is a graduate of Mt. St. Joseph Academy in Rutland, VT, where she was a four-year member of the tennis team. She taught skiing at PICO Peak part time between 1975 and 1983, earning certification as a PSIA (Professional Ski Instructor of America Eastern Division) certified ski instructor in 1979. Jean attended the University of Vermont and graduated in 1981 with a B.S. in education with certification in special education. She met her husband, Jack, in 1979 in the Yale Bowl and they were married in 1982. Jean taught special education in Toledo, Ohio between 1981 and 1986 and coached volleyball. Soon, raising her three children, Patrick, 29, Kathleen, 26, and Brian, 24, became the focus of her life, putting her teaching career into hiatus.

Jean Kelley joined the Myelin Project in 1995, since her son, Brian, was diagnosed with adrenoleukodystropy, a disease of the central nervous system. In 1996, Jean joined a few friends to run in the Ocean State Marathon to benefit the Myelin Project, raising $50,000. She never looked back. The next year she was invited to be affiliated with the Hammerfest Triathlon at which time the Myelin Project became its beneficiary. She served as Director, member of the Board of Directors of the Myelin Project from 1997 to present. Jean has developed a passion for participating in triathlons and becoming an awesomely enthusiastic fundraiser for the Myelin Project. In Branford alone, her work has helped to raise over a half million dollars by orchestrating two annual fundraisers, the “Hammerfest Triathlon” and “Brian’s Beachside Boogie. She has been involved with triathlons in Greenwich, Niantic, Branford, and a number of other venues as she continues to raise money and awareness for the Myelin Project. In addition to her challenging array of responsibilities, Jean is a member of the Board of Directors of Soundview YMCA, Branford, 2009-present.

Dr. John “Jack” Kelley was a senior class officer, member of the National Honor Society and salutatorian at Archbishop Hoban High School in Akron, Ohio, in 1977. He was an All City and All NE Ohio football standout and a sectional wrestling champion. He attended Yale University and graduated in 1981. He was a three time letterman for the Bulldogs and a member of the 1980 Ivy League Champions. His 1979 team posted an 8-1 record, sadly losing to Harvard in the season’s final game.

Dr. Kelley earned a medical degree from the Medical College of Ohio, was a resident in general surgery at Yale New Haven Hospital and the Newington’s Children Hospital and the Orthopaedic Chief Resident at Yale- New Haven. He received a sports medicine fellowship to the Kerlan-Jobe Clinic in California and provided sports medicine coverage for a number of professional and university sports teams while there. Dr. Kelley is a successful orthopaedic surgeon and an Assistant Clinical Professor at the Yale School of Medicine. He is a partner in the firm of Connecticut Orthopaedic Specialists. Dr. Kelley’s expertise involves the treatment of injuries to the shoulder and knee with emphasis on sports related injuries. He has authored several publications dealing with sports medicine. His volunteer assistance to local sports teams is legendary.

The Kelleys have been co-partners behind outstandingly effective activities to raise awareness and funds for the Myelin Project. Patti Chapman, the President of the Myelin Project, recently said “Jean, and her husband, Jack, are truly inspirational to so many of us who have the honor and pleasure of knowing and working with them in the past.

The Kelleys recently launched “Brian’s Hope,” a charitable foundation whose goal is stopping the progression of adrenoleukodystropy, a disease of the central nervous system. With their beloved son Brian as motivation, and through the undying support of family and friends, Jack and Jean Kelley are an inspirational team of Branford citizens who have become a powerful force for good.