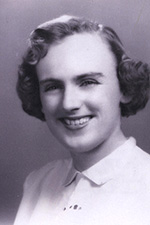 The mid 1940’s were a trying time for female sports programs in the Branford Community.  In addition to a lack of intramural athletics, the town’s recreation activities catered to males exclusively.  Along came 2003 Branford Sports Hall of Fame inductee Janyce Smith Dean.  As integral component in varsity high school sports and as a major component  to the junior bowling program, tonight’s inductee helped create the foundation of girls’ sports.

“Jan”, as she was nicknamed attended Branford High School and was a member of the Class of 1948.  When she first attended Branford, the girl’s athletic programs were of the intramural sort. She played field hockey in the fall, basketball in the winter and softball in the spring. Finally, in her junior year, the school board allowed the girls to play these sports against other schools in the area.  They were called “play days”.  The players had to make their own arrangements for transportation and the board did not provide uniforms.  In her senior year, the girl’s sports season opened in the fall season with field hockey, a sport which had a turnout ratio more than any other athletic team at that time.  At the end of the  1947-48 season, two all-star teams were made up, composed of the Juniors-Seniors and Freshman-Sophomores.  These teams played a fast and furious game which the Junior-Senior squad won, 4-1.  The girls were chosen to these teams based on sportsmanship and skill and included Janyce.

In 1948, the Girls Athletic Association of Branford High School voted to offer a special award to a girl chosen for all- around participation in sports and sportsmanship, which was won by tonight’s inductee.

After graduating from Branford High School, she attended Boston University: Sargent College from 1949 to 1953, where she was a 4 year team member of the volleyball, basketball, softball and tumbling team. In her senior year in college, Jan coached the freshmen basketball team.

Following college, Jan taught part time for the Branford Recreation Department in basketball, gymnastics, volleyball, skiing and bowling programs. She ran and developed the bowling leagues for grades 3 thru 12. This included a “Learn To Bowl” program and many special bowling tournaments between many towns in the county. Her program involved the participation of over 400 children a week and included instruction for the SARAH group once a week.  In 1979, she received the 1st Coaches Award given by the National Junior Bowling Congress.  Outside of the athletic spectrum, Janyce was a pivotal member of the Historical Society and the Branford Land Trust, in addition to being a Sunday School Instructor and the Branford Girl Scout Leader for 7 years.  She helped plan and run an extensive 1976 Bicentennial program for all girl scouts in the New Haven County and taught adult Girl Scout leadership training sessions.

In 1989, she moved to Guilford, New Hampshire and joined the Thompson-Ames Historical Society and assisted in many of their projects.  Jan became a member of the Kindall Wildlife Trail System and later helped produce ABC Quilts for sick children in the hospital.

Jan is married to her husband, Robert, and is the mother to two children, Rick and Nancy and the grandmother of six.