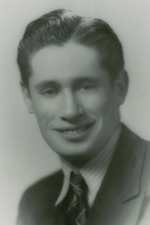 Philosophers have said those who exhibit loyalty receive respect, those who portray sportsmanship acquire recognition and those who demonstrate desire achieve success.  With these aforementioned qualities, 1995 Branford Sports Hall of Fame inductee James N. Barba provided many proud moments to teammates, to fellow military officers and to citizens of Branford.

While attending Branford High School, Barba was a very versatile athlete.  He played basketball, football and baseball all four years of high school.  He served as captain of the baseball team during his sophomore and senior years.  In football, he played halfback and was a field goal kicker and punter.  He was a teammate of 1993 Branford Sports Hall of Famers Joe “Butch” Naimo and Steven Hyliniski.  James was an instrumental part of the Hornets football squad, which gained second place in the Housatonic League Valley Conference, defeating Shelton (19-0), Milford (20-6), and Stratford (7-0).  In 1939, he played with another Hall of Famer, 1990 inductee Walter Tamulevich.

James played varsity basketball during his junior and senior years at Branford High School.  He played the guard position hard under the boards against taller and heavier opponents often coming up with the ball because he would not be intimidated.  He played to win and loved competition.  When things went well, his trademark grin said it all.  In 1937, the Hornets basketball squad finished with an 18-5 record and won the Housatonic League Class B Championship and Connecticut Class B Champions.  Under the guidance of 1988 Hall of Fame inductee John Knecht Jr., Barba played alongside 1993 Hall of Fame inductee John Yusievicz, fellow inductee Victor Lukawsky and Joseph Naimo.  That year, the Hornets won nine of its first 10 games and in the Class B Tournament, outscored its three opponents (Robert Fitch, Wallingford and Naugatuck) 112 to 52 to capture the title.  The following year (1937-38), Barba and the Hornets turned in the most successful record of any team in Branford High School, bringing home the only undefeated record in Connecticut, and capturing the Housatonic League and Connecticut Class “B” State Championships.  That team was the first squad to go through its season undefeated winning twenty-one straight and also the first year that a Housatonic League winner has been undefeated.

In baseball, “Rocco” as he was called, had a good arm as well as being a great catcher and hitter.

In a class of outstanding athletes, tonight’s inductee was voted “Most Athletic” by the class of 1940.  After graduation, he joined the 101st Airborne Division of the Paratroopers at the beginning of World War II and was killed in action during the D-Day Invasion on June 6th, 1944.  For his heroism, he was posthumously awarded the Distinguished Service Cross, the country’s second highest honor and earlier, had received the Purple Heart.

“It is really an honor and a privilege receiving this honor on my brother’s behalf.  If he was here today, he would be so proud of achieving this award” said Barba’s brother, Frank.