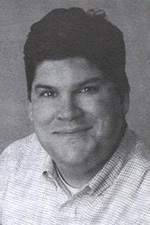 “Home is where the heart is” has been the mantra for 2005 Branford Sports Hall of Fame inductee James Bell in the athletic, academic and professional fields.

A scholar-athlete at Branford High School from 1982 to 1985, Jim was a two sport athlete in football and basketball. In his sophomore season, he was a defensive and offensive tackle on the football squad which went 8-2 under then first year head coach Doug Morrell.  Over the next two seasons, Jim was an instrumental part of Branford’s back to back 7-3 records. In his senior year, he was a team captain and selected to the All-Housatonic League First Team and All-State First Team (Defensive Tackle).

As a four-year member on the Hornet basketball team, Jim was a varsity letter winner at center for three years, including captain in his senior season.  He was selected to the All-Housatonic League team, the All—Tournament First Team and the Most Valuable Player in the Branford Holiday Festival Basketball Tournament.

Following high school, Jim attended Harvard University from 1985 to 1989. He played on the freshman football team in 1985 as the Ivy League did not allow freshman to play varsity sports at that time.  Jim was a three year starting defensive tackle from 1986 to 1988 and a member of the Ivy League championship squad in 1987. In his senior year, tonight’s inductee was named to the All-Ivy League First Team as a Defensive Tackle and All-New England First Team. Jim was the only Ivy League player selected to the team that year.

After graduation from Harvard, Jim’s travels sent him to Barcelona, Spain, where he played, (as a Defensive Tackle) and coached (as a Defensive Coordinator) for the Barcelona Boxers from 1989 to 1992. The team won the Spanish equivalent of the Spanish National American Football Championship, known as “Super Copa” in 1990.

While in Spain working as a translator, Jim caught his big breakthrough for NBC-TV as a sports producer and in particular Coordinating Producer of  NBC’s Olympics coverage before being named Executive Producer of the “Today” Show.

Now residing in Greenwich, Connecticut, Jim is married to his wife, Angelique, and is the father to four boys:  Jimmy, Lucas, Emmett and Nicky.