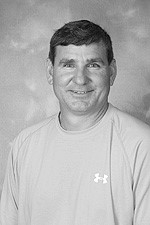 Amicable. Authentic. Devoted.  Those are just some of the traits, which best described 2007 Branford Sports Hall of Fame inductee John “Jake” Palluzzi as a prominent basketball player, a stellar educator and a motivating role model to the community.

While at Branford High School, Jake was a two-year starter and captain of the 1978 undefeated (20-0) Housatonic League Championship Team.   During his junior year, Branford won the Housatonic League championship, posting an 18-2 record and was coached by Branford Sports Hall of Fame coach Tom Murray (1992).  He was an All-League selection, the New Haven Tap-Off Club First Team All County and Honorable Mention All-State Player.  While at Branford, he was also a promising tennis player, helping the team gain notoriety as being one of the “most respected teams in the state”.  Another Sports Hall of Fame inductee, Gerald Crotty (2000), coached him.

After graduation, Jake enrolled at Southern Connecticut State University when Art Leary was named head coach in a bid to revive the program.  In his junior and senior seasons, he led the Owls to back-to-back league titles and a trip to the Sweet Sixteen in his senior season. He was a four-year starter for the Owls and held the school record with 105 starts.  He was named the only captain for his junior and senior seasons. He led the school to a record 22 wins and a sixteenth national ranking in Division II. He also led the team in assists and free throws throughout his college career.  During the 1981-82 season, he received the prestigious Bob Cousy Award, as the best over-all player 6’0” and under in Division I, II, and III in New England.

North Branford High School hired Jake and made him the youngest head coach in the state (24 years of age) at the time.  He compiled a 45-43 over-all record and is still the winningest coach of all time in North Branford High history.  He holds the school record for wins (18).  In his fourth and final season, the Thunderbirds won the Shoreline Conference regular season title while compiling an 18-5 overall record.  For his accomplishments , Jake was named Shoreline Conference Coach of the Year as well as New Haven Register All Area Coach of the Year.  While at North Branford, he qualified for the C.I.A.C tournament in 3 of his 4 seasons.

Jake came home to Branford and was named Boys Head Basketball Coach at Branford High School. Now in his 20th season, tonight’s inductee has 227 career wins.  In 1991-92, his team won the Housatonic League title sporting a 15-8 record and his 2004-05 team compiled a 14-8 record and won the Inaugural Oronoque Division Championship.  Under his direction, Branford has qualified for the C.I.A.C.  Tournament eleven times, where he has posted 10 wins and a trip to the Quarter Finals.  The Hornets have also qualified for the SCC Tournament on three occasions.  For his accomplishments, tonight’s inductee has received the Sportsmanship Award given out by league officials on more than one occasion.  He has been selected to coach in several post-season all-star tournaments.

Jake has taught health & physical education at Branford High School for the past 23 years.  He has served as a co-athletic director with Savas Synodi for the past 16 years   Tonight’s inductee coached the Branford High School Boys Tennis Team for 12 years and won two Housatonic League titles.   He also served for five years as the Head Boys and Girls Cross Country Coach.

Within the community, he volunteers his time with the Branford Junior Basketball League, conducts several basketball clinics and fundraisers for high school athletic teams as well as running an annual golf tournament.  He is actively involved with the Special Olympics for the State of Connecticut and he was named the 1987 Coach of the Year by the Connecticut High School Association.

Married to his wife, Marci, Jake is the father to Emma, Tess and Jake.