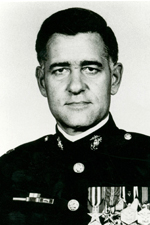 If there was one word to describe the theme of Jack Cirie’s life in sports, academics, and the military, “tradition” would best suit tonight’s Branford Hall of Fame inductee. Known as the “Little General” to the family, Jack excelled in both baseball and football at Branford High School and made football his main love at Yale University.  He graduated in 1964 with a B.A. degree in Latin American Studies before entering the United States Marine Corps.

His first moments as an athlete began in his days on the baseball field. As a little league player, Jack earned the “MVP” award in an all-star game before continuing to play baseball at Branford High School. There, Jack played second, third, and shortstop and was known to have quite an impressive swing. He earned four varsity letters and a top sportsman award, called the Savitt Award.

Cirie’s greater moments come on the football field. In his first year with the Hornets, Jack won the Outstanding Freshman Award in 1956. He was elected captain in his senior year and during 1960, he scored 46 points and threw for nine touchdown passes, a Branford record. As a middle linebacker for the Hornets defense, nobody could stop Cirie. In one game alone, Jack made 19 individuals tackles, a mark unheard of today.

Throughout his football career at Branford, Jack earned four varsity letters and the Most Valuable Player Award, as well as being selected to the All-Housatonic League Team as its quarterback.  Jack also was named the All-State Team quarterback and the honorary captain and captain of the All-Star East Team iin the Nutmeg Bowl in 1960.

After graduating from Branford High School, Cirie attended Yale University, where he participated in lacrosse, boxing and football. In 1962, he was voted the Outstanding Yale Player Award in acknowledgement of his great defensive performances.

Upon graduation from Yale in 1964, Jack entered the Marine Corps Officers School. In March of 1965, he was platoon commander with the first marines to enter Vietnam. His superior efforts earned him many prestigious medals which include the Silver Star, The Bronze Star, and the Vietnamese Cross of Gallantry. In 1972, Cirie graduated from the Wharton School with a Masters Degree in Business Administration. In 1984, he retired from the United States Marine Corps as Lieutenant Colonel.

At age 49 and a resident of Seattle, Washington, Jack lives with his wife Annie Brook Cirie and their children, Cybele, Andrea, and Amanda.

Now as he enters the Branford Sports Hall of Fame, Cirie reflects on what it means to him.  “This award means I was appreciated. It means the fruits of the father’s labor, especially my father and my family, really were borne out. This award really means I was and am appreciated by my first tribe – Branford. To come back and receive the award is like coming back home and having my original community there with me.”