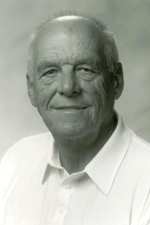 As this Branford Sports Hall of Famer captured his first swimming award at the tender age of eight, those around Howard Johnson might have speculated a great swimming career for him, and they were correct.  After swimming in various shoreline meets, Howard went to Hillhouse High School and later captained the team in 1937.  Before attending Yale University, Johnson continued his education at Mercersberg Academy in Pennsylvania before entering Yale University in 1938, where he had an outstanding swiimming career.

Howard was a vital member to the Mercersberg Academy swim team which he led to an undefeated season as well as winning the National Prep School Championships.  Howard won the 220 free style and was a member of the winning relay that year.

At Columbus, Ohio, in the National AAU Championship, Johnson finished second in the 100 yard freestyle and was elected to the All-American Swim Team of 1938 only to repeat the feat the next three years.  As a senior and captain at Yale, Howard led the undefeated swim team in its dual meet competition and went on to win the three major championships – Eastern Intercollegiate, National Intercollegiate, and Senior AAU titles.  Yale was the first college team to ever accomplish this.

After graduating form Yale, Johnson served with the United States Navy in the Pacific and later returned to compete in the National AAU Championships and was a member of the 400 yard relay team that won the event and established a world record.  In the 1950’s, Howard was selected to the National Swim Hall of Fame as a result of the 100 yard world record.  Johnson was chosen on an honorary Olympic swim team in 1940, but the games were cancelled due to World War II.

Now married to Marjorie Gesner since 1943 and surrounded with three daughters and nine grandchildren, Johnson is pleased to be inducted into tonight’s Branford Sports Hall of Fame.

“It’s nice to know that I have not been forgotten by the people of Branford and to be acknowledged among friends.  I feel very grateful and quite enthusiastic about it.”