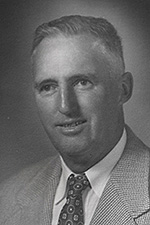 His mark of excellence shone brightly in every avenue of athletics, academics, business, politics, and community.  Whether it was his presence as a center on the basketball team or his dedicated service as a Line Foreman for 46 years with the Connecticut Light and Power Company, 1998 Branford Sports Hall of Fame inductee Herbert “Pat” Sykes gave unselfish contributions for the well-being of others.

Born on December 12, 1907, and raised in Branford all his life, “Pat” attended Branford High School from 1922 to 1926. While there, he was a three sport athlete and in his senior year was captain of the football ( as a back), basketball ( as a center), and baseball (center fielder) teams. The 1925-26 basketball squad proved to be one of the most successful in the history of Branford High School.  A long and difficult schedule of games was played, during which Branford met and defeated some of the largest and best school teams in the state.  Out of the 24 games played, the Hornets won 15 and lost nine. The most notable accomplishments of the team were wins over Wilby High School (16-15), West Haven (21-15), Congress High (45-20), and New Haven High School (21-20), the state champions.  That year, Branford was chosen to take part in the Interscholastic Championship of the State for the Class “C” and “D” teams held at Storrs College.  Contrary to expectations, Terryville eliminated Branford in a very close contest (23-17).  During the season, Branford scored a remarkable total of 673 points to its opponents’ 479.  On the season, “Pat” was the fourth leading scorer on the Hornets with 66 points.  Tonight’s inductee played with fellow inductees Adolph Mischler ( inducted in 1992) and Rudy “Scag” Johnson (1994).  Voted by his fellow classmates as “Most Athletic Boy,” ‘Pat’ graduated in 1926 and was offered an athletic scholarship at the University of Connecticut, but chose not to go.

After high school, he played with several baseball and basketball teams and also with the Branford Laurels football team.  Off the playing field, “Pat” coached several Branford Little League teams, in addition to being a charter member of the Representative Town Meeting. He also served one term as Selectman with Don Holabird and four terms with John B. Sliney.  When he retired from office, “Pat” was honored by the town for a decade of devoted service.  “Pat” also held positions on the Branford Recreation Department Commission, the Sewer Authority, and the Public Works Commission.  During the 25th Anniversary of the Recreation Department in 1988, he was honored for his  dedicated service, interest, and concern for the residents of Branford.

Sadly, on December 3rd, 1979, Branford lost one of its proudest patriots, when “Pat” died at the age of 71.  He was survived by his widow, Charlotte Tobin Sykes, three children:, Patricia Oksanen, Charlotte Sykes, and Michael Sykes, seven grandchildren, 14 great grandchildren and his sister, Elizabeth Quinn. His sister, Alicia Beach, recently passed away.   “ He would have been very proud and happy to receive this honor into the Branford Sports Hall of Fame.  This is a great tribute to ‘Pat’,” said his wife, Charlotte.