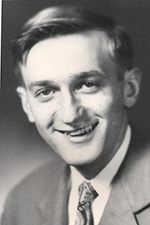 Every class, in every town, has a member of its student body who is seen as a hero, an inspiration, and a leader.  During the early 1940’s at Branford High School, 1998 Branford Sports Hall of Fame inductee Henry S. Olejarczyk claimed those roles as a varsity basketball player and later in life as a businessman and politician.

Born in Branford on August 3, 1927, the son of Stanislaus and Wladyslava ( Gladdys) Modzelewski Olejarczyk, Henry attended Branford High School from 1941 to 1945.  He was a varsity basketball for three years, playing for fellow Hall of Famer Johnny Knecht Jr. ( inducted in 1988). During his junior season, Henry was part of the Hornets basketball squad which won the Housatonic League title and won 14 games while losing only three in their regular season.  After two tournament wins over Windsor and Wallingford, the Hornets faced East Hartford in the Class B Finals, and after leading all the way, lost a heart-breaking game in the final seconds, 39-37.  Throughout the season, Henry was the teams second leading scorer with 170 points, and was remembered that season for his 22 point game against Seymour on their court, falling one point short of a new court record and was the highest in a single game for the Hornets squad.  Henry’s teammates that year included current Hall of Famers Joe Orsene (1989) and  Bill Hinchey ( 1991).

As captain of the basketball squad in his senior season, Henry led the Hornets to the State Championship, defeating Wallingford, Rockville, and Derby. In the regular season, the Hornets finished second only to “A” class Stratford in the Housatonic League.  During the 1944-45 season, Henry was the second leading scorer (230 points), points per game (11.0 average), and best free throw percentage (.790).  Joining Henry on this team were fellow inductees Hinchey, Jim Murphy ( 1995),  Robert M. Geier (1996), Ken Erickson (1997),  and Tony Proto (1998). This unit was coached by yet another Hall of Famer – Warren B. Sampson Jr. (1992).  Off the playing field, tonight’s inductee was Senior Class Vice-President, Milestone Yearbook Editor, and voted “Best Athlete” and “Most Likely to Succeed”.

Following graduation, Henry attended the University of Connecticut at Storrs, where he received his degree in Industrial Management in 1949. He was a member of the men’s basketball team during his freshman, sophomore, and junior season. While there, he was a starting center for the Huskies, known for his one handed flips, and led the teams from 1945 to 1948 to a 44-14 win/loss record and was awarded the Phi Epsilon Pi Trophy to an athlete who gave his untiring effort in molding the team throughout the season.

Henry was then employed by Bradley & Upson for twenty-two years.  Henry was also a contributing member to the political spectrum as a member and former Chairman of the Planning and Zoning Commission and on the Democratic Town Committee.  Married to Lillian Makosky Olejarczyk, Henry was the father to son, Stephen Henry Olejarczyk and left behind a sister, Jane, and a brother, John.   Sadly, Henry passed away on February 19, 1967 at the age of 39.  “Henry would have very pleased and honored to be included into the Branford Sports Hall of Fame.  We are very excited about this award,” said his wife, Lillian.