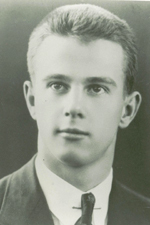 Desire and talent are among the necessary elements needed to be a great athlete.  For 1994 Branford Sports Hall of Fame, inductee, Henry “Hank” LaCroix, courage can be added to that list.  After battling back from a compound leg fracture which required the insertion of a silver plate to prevent a lifetime of living with one leg shorter than the other, LaCroix became an outstanding basketball player for Branford High School during the 1930’s.  A three sport athlete in football, basketball and baseball, LaCroix, born in Branford on January 17, 1918, assisted the Hornets basketball squad during the 1934-35 season to a second place finish in the Housatonic League as a center as well as being selected to the First All-Housatonic Basketball team.  Playing under the tutelage of 1988 Branford Sports Hall of Famer Coach Johnny Knecht, Jr., LaCroix and the Hornets won 16 games and lost seven.  That year, Branford played 10 of its games with Class B schools and won them all while winning three contests against Class A schools and was considered the best team ever to don the Hornets uniform.  Branford exhibited its finest play during the Class B tournament defeating Naugatuck 41-26 behind LaCroix’s 16 points, then foiling Norwalk 36-18 before bowing to Meriden 32-37 in the semi-finals of the Class A-B tournament.

In LaCroix’s senior season, he was named the team captain and for good reason.  After losing its first three games, coach John Knecht Jr. made some line-up changes and allowed LaCroix to lead the way.  What followed was a seven game winning streak, including a 14 point victory over Lyman Hall, giving the Hornets a tie atop the Housatonic League with the Wallingford team.  In the game, LaCroix netted a game high 13 points.  A few contests later, the Hornets took sole possession of the Housatonic crown, beating Lyman Hall on their own home turf, 35-19, where 1993 Hall of Fame inductee Joe “Butch” Naimo scored 12 points and LaCroix added nine.  The Hornets went on to win the Housatonic League championship and the Class B championship for the State of Connecticut.  LaCroix, in addition to playing basketball, participated in football as an All-Housatonic League back, a Branford Laurels fullback and as a baseball outfielder, where he hit .449 in his senior season.

Off the playing field, LaCroix contributed to his school by acting as Class President, Junior Prom Committee Member and Class Book Committee Member as well as being voted as Most Athletic Male and Best Dancer.

Married to Betty Boldtman, LaCroix was the father of four children: Cheryl, DeeDee, Dana, and Henry (Jay) Jr.  LaCroix passed away on January 12, 1977.  “We are so proud of this award.  We can see him smiling if he was still alive today to accept it.  It is truly an honor to accept this award on his behalf,” said one of his daughters, DeeDee.