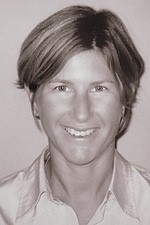 Opponents flinched when they played against her.  Teammates convened around her.  Coaches adored tutoring her.  Throughout her career as a three-sport athlete, 2007 Branford Sports Hall of Fame inductee Heidi Papoosha provided a winning attitude wherever she went.

At Branford High School, where she was a two-sport athlete, Heidi competed in field hockey and softball.  Playing for Branford Sports Hall of Fame coach, Cathy McGuirk (1994), tonight’s inductee was a pivotal contributor to three consecutive state finals as a starter.  During her sophomore season, the field hockey team captured the Class M State Championship with a record of 16-3, defeating East Lyme in the finals, 1-0, in overtime and she was named to the All-State Second Team and All-Housatonic First Team.  The following year, she led the Hornets to an impressive 14-1-3 record, a first time Housatonic League title, and an appearance in the Class L State finals. For her efforts, Heidi was placed on the All-State First Team and All-Housatonic League First Team and won the Team Offensive Award and Most Valuable Player.   The team ended the regular season ranked number one in the state, also a first time accomplishment.  During Heidi’s senior season, Branford went undefeated (17-0-1) and captured another state title.  The Hornets shut-out every opponent, with the exception of Cheshire (a 3-2 win), and Stonington (a 2-2 tie).  She was a key contributor to the state tournament’s semi-final game as she netted two goals in the victory.  In the championship game, Branford defeated Pomperaug, 2-0. Twelve players, including Heidi, made the All-Housatonic League team and she was honored with a selection to the First Team All-State for the second straight year. She earned a place on the All-State First Team and the All-Housatonic League First Team and won the Team Offense Award, Team Most Courageous Award, Team Defensive Award and the Most Valuable Player. Throughout her career at Branford High School, Heidi netted 49 goals and dished out 27 assists.

In addition to field hockey, tonight’s inductee also played softball for four years and earned a spot on the All-Housatonic League team as well as co-captain in her senior year.

Following high school graduation, she attended the University of Connecticut, where she continued to play field hockey.  A four-year varsity letter winner, Heidi was part of the 1990 team, which made an NCAA tournament appearance, and a member of the 1992 Big East Championship team.  Throughout her four years at UConn, Heidi was named to the All-Region Team in 1991 and 1992, an All-American in 1992 and team captain in her senior year (1992).  Tonight’s inductee was selected to the Junior National Team (1992), a National Team Member in 1993, and won the 1992 UConn Club Award for being the outstanding senior athlete. In 2000, Heidi was inducted into the Connecticut Field Hockey Hall of Fame.   She graduated with a Bachelor of Science degree in Family Studies.

Currently, she works at Hideaway Beach Club in Marco Island, Florida as its LPGA Head Golf Professional.  She oversees the entire golf operation and instructs private and group lessons.

The inductee is the daughter of LouAnn and Jerry, sister of Scott (wife, Katie) and Jodie and the aunt of Sean and Kylie.