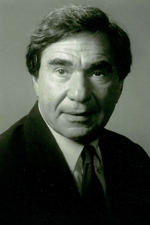 Reserved, yet caring, he stood patiently on the sideline watching as any good teammate would.  His immediate reaction to an injured Branford High School athlete was as if one of his very own went down.  1994 Branford Sports Hall of Fame inductee Harold Levy, M.D. became a very important member of the Branford athletic community largely in part to his dedication, his medical knowledge, and his love for people and sports.

Born in New Haven on July 24, 1933, Levy attended Branford elementary schools from 1938 through 1947.  He entered Hillhouse High School in 1947 and graduated with the class of 1951 and later attended Yale University from 1951 to 1955.  Upon receiving his Bachelor of Arts Degree, Levy attended Boston University School of Medicine, where he earned his Doctor of Medicine degree in 1959.  He served as the team physician for the Hamden Bics, a professional basketball team in the 1970s and attending physician and medical advisor for the Branford Junior Football League during the same time.  Currently, he is a Doctor of Medicine and Surgery, engaged in private family practice, and solo practitioner in Branford.

“Doctor Levy was an integral part of the whole program.  He gave far and beyond the call of duty.  I always trusted him when an athlete was going to be ready or when an athlete could go back into a game,” said Joe Farina, who was the Hornets coach from 1969 to 1978.

“We felt very fortunate to have a man of Doctor Levy’s caliber on our sideline.  He is a man with a lot of talent – an excellent choice for the Branford Sports Hall of Fame.  He is a guy who deserves it (the award),” said Rich Cavanaugh.  Len Bonn said,  “He was a very important fixture at Branford High School football games.  Doctor Levy is a very valuable medical resource and the kids on our team liked having him around.  It is a great honor for him to be inducted into the Branford Sports Hall of Fame.  This couldn’t happen to a nicer guy.”

On the athletic field, Levy played fast pitch softball in the late 1940’s and 1950’s for various teams and outfield for the Branford American Legion and the Branford Merchants.  Married to Patricia Markle Levy and the father to Andrew Mark Levy, Ellen Sue Greenberg, Debra Jane Kirschner and Betsy Jill Levy, Doctor Levy is honored to be inducted to the town’s Hall of Fame.  “I think this award is very exciting for me.  It is a nice honor and I am very proud of it.  I have tried to do that best I can with the sports programs in Branford, not only as a team physician but as a spectator and supporter of all sports, both female and male.  I appreciate this honor very much,” said Levy.