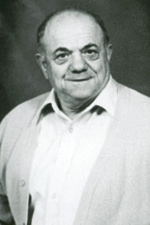 Nobody ever thought of Billy Panaroni as a small man for one always looked upon his athletic performances as packaged dynamite. He considered himself as good as more renowned luminaries and was quick to prove it.

His was the heart which creates eye-catching accomplishments. He gave no quarter and expected none, a trait which highlighted the experiences of the Eastside family.

There was little time for pleasure in the family of the Italian immigrant, who took work where he could find it, and encouraged his children to do the same. Fred, Gino, Peter, Julius and Bill were of  the same mold, strong beyond the ordinary.

Billy was the smallest in stature. He was agile and swift and played with fervor as if he had to prove his abilities. On the sandlots of his schooldays, he showed running techniques beyond his experience in football. But his appearances were always spasmodic because of family pressures. He left high school in 1937, a remembered glory year in the regime of Coach John E. Knecht, and took a job as a driver for Emil Nygard who maintained an express delivery service in addition to owning a transportation company leased by the Atlantic Wire Company for in and out of state operations.

Not one to cry over spilled milk, Bill started playing semi-pro football, not unlike Gino and Pete, but he leant his services wherever he was needed. His services were welcomed statewide for he was a cog in the backfields of the Wallingford Walco, the New Haven Blues, and of Branford’s Laurels and Rams, as well as with the Roessler Yellow Tags, the Colony Club and the Hamden Falcons. One of his softball affiliations was with Dave Hylenski’s Sportsmen’s arrays.

His stature might be compared to that of Buddy Young, that Illinois All America who sparked the American football conference with the old New York Yankees, but Billy might have had a shade of better defense ability. He was a sure tackler who rarely failed to bring down an opponent.

On the road as frequently as he was, Bill seemingly had connections throughout the state, for his was an engaging personality. Yet, he had lonely and tiring hours behind the wheel. Thus, it was that when the late realtor Dan W. Owens set up the road running feature of the early Short Beach Days, he sought out Billy, hoping for local color.

For the next twelve years, the little firebrand led the harriers over the five mile route from Short Beach School to Plant’s Bridge, over the hills to the East Haven Green, down Hemingway Avenue and back down to Short Beach Road to the starting point. Never did he make much of his accomplishments, but there is a sparkle in his eyes even today when he assesses the huge field in Branford’s marathon. He would have loved the competition and, for sure, would have been among the pacesetters; even as he is among the first inductees in our Hall of Fame.