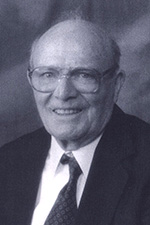 Success, hard work, team-oriented, caring, and pride was never more synonymous with one individual than it was with 2000 Branford Sports Hall of Fame inductee Gerald Crotty. As a player, a coach, an educator, and as a fan, “Gerry” exemplified the winning traits of Branford athletics.

Born in Bellows Falls, Vermont, he lettered in high school football, track, basketball and baseball.  His main passion was football, a sport, which to this day remains close to his heart as his all time favorite.

During World War II, he served on a Coast Guard picket boat in New York Harbor.  His boat’s duties included patrol, transporting pilots, and rescue missions.  During this time, Gerry earned a medal fighting a fire on an ammunition ship.

When he returned from the service, he attended Springfield College, chosen because of his interest in teaching and coaching. After graduation, Gerry taught at Pembroke Academy and coached the varsity basketball team.  After three years, he returned to Springfield College to attend graduate school where he earned his Master’s degree.  He then moved on to Lebanon High School in Lebanon, New Hampshire and was an assistant football coach and taught Social Studies.

Gerry is married to his wife, Marie and is the father to son, Brian.  He retired from Branford High School in 1985.