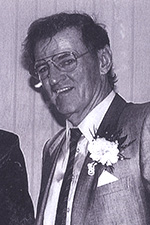 Regardless of the task or challenge at hand, success was usually the outcome for 2004 Branford Sports Hall of Fame inductee Gerald Booth Lusteg.  As a three sport athlete in high school and college, a professional baseball and football player, an educator, and an unselfish volunteer, tonight’s inductee demonstrated true pride.

“Booth” attended Branford Highs School from 1952 to 1955 and played football, basketball and baseball.  On the football field, he played several positions (running back, defensive back, kicker and punter).  His career punting average was over 40 yards and as a running back, he ran for over five yards a carry.

As a three year guard/forward on the Hornets basketball team, Booth led the Housatonic League in scoring and set the all-time high game point total twice with 35 points.  He scored in the 30 point total four times and made the All-State team.  A second baseman and shortstop on the baseball team, tonight’s inductee led the team in home runs, held a batting average of .350 and was the team captain.

Following graduation, Gerald attended the University of Connecticut and was a member of the undefeated freshman football team.  As a punter on the team, he averaged 43.0 yards per punt and as a guard on the basketball team during his freshman and sophomore seasons he was part of the Yankee Conference championship team.

Booth later represented Branford in the professional sports spectrum as a minor league baseball player in the Anaheim Angels farm system for two years held a .303 batting average and tied for the team lead in stolen bases.

His claim to fame came in his career in the National Football League as a place kicker.  Booth was signed as a free agent in 1966 for the Buffalo Bills and was 19 of 38 in field goal attempts and converted on 41 of 42 extra points tries.  To this day, he co-holds the record (with Scott Norwood) for most points after a touchdown in a single game (7), which occurred on September 18, 1966 versus the Miami Dolphins.  He later played for the Miami Dolphins, Pittsburgh Steelers (1968), and the Green Bay Packers (1969).  In 39 games in his N.F.L. career, Booth scored 202 points.  He played with such notable N.F.L. Hall of Famers including Bart Starr, Joe Namath, Bob Griese, Mean Joe Greene, Larry Czonka, and many others.  He also played for the World Football League’s Portland Storm where he won four games with last second kicks.

With a Masters’ Degree in Teaching, tonight’s inductee has unselfishly donated his time with numerous organizations including the Fellowship of Christian Athletes and is the founder of the G. Booth Lusteg  Kicking Camp known as “Kicking for Christ”, a non-profit free camp for underprivileged  kids.  He also headed a drop-out prevention program for troubled teens.  He has authored 42 sports and social issues that have appeared in major newspapers across the United States including the New York Times, Washington Post, Chicago Sun News and Sports Illustrated.  Gerald is also an author of a book entitled “Kick Rejection and Win!” published by Publish America, now in major book stores and he also has personal items on display in the Miami Dolphins Hall of Fame.

Booth also had the opportunity to shine in the motion film industry as he acted in three major motion pictures – Airport ’77, Black Sunday and The Greatest (The Life Story of Mohammed Ali).

Living in Pembroke, Florida, Booth is the husband of wife, Carol, and the father to daughter, Lisa.