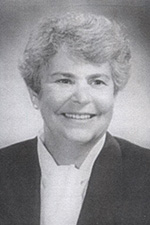 In every avenue of athletics, academics, and local government, 1999 Branford Sports Hall of Fame inductee Georgette “Tootsie” Laske has left her mark of excellence and success to many around her.  Whether it was her competitiveness on the athletic field or her accomplishments at her job for the town of  Branford, tonight’s inductee gives her time to serve the well being of others.

Born on August 20th, 1935, the daughter of Frank and Georgette Shemouny  Amendola, Tootsie was a graduate of Branford High School and played basketball, field hockey, volleyball, and gymnastics for her high school team. In basketball, Tootsie was a guard on the Hornets team and played for coach and  Hall of Fame inductee (1990) Virginia Moessmang.  Throughout her four years at Branford High School, the basketball team had a record of 14-10.  Besides playing sports at Branford High, she also was a varsity member of the cheerleading squad and cheered many teams during the 1950’s to many Housatonic and State Championship titles.  As a graduating senior in 1953, Tootsie was voted “Best Alibier” and “Neatest” in her class, in addition  to being a member of the Branford High School Milestone staff.

Following high school, Tootsie worked for Security Insurance Company and Nationwide Insurance and also played on the softball team for the Security Insurance Team form 1953 to 1955 as a shortstop and pitcher.  In 1954, Tootsie and the Security Insurance Team claimed a championship in the women’s 18 and older league.  From 1956 to 1957, Tootsie was a two year pitcher on the Nationwide Team and claimed her best performance against the New Haven Telephone Belles, an 11-7 slugfest in the New Haven Park and Recreation Softball League. She also played in summer softball leagues with the Branford Recreation Department and competed against teams in New York and anywhere else Recreation Director and hall of fame inductee Joe Trapasso (1988) could schedule games.  She was invited to play basketball with the New Haven Speed Girls but declined due to other commitments.

Branford was graced with her presence as a full time town employee as she was named Branford’s Assistant Town Clerk, a position she held for 13 years from 1978 to 1991, before being named the Branford Town Clerk in 1992.  Tootsie volunteered her services in 1995 for the Special Olympics World Games Connecticut and she has been a member of the Italian-American Women’s Auxiliary of Branford.

Married to her husband, James, Tootsie is the mother  to four children: Kathleen, Nancy, Thomas, and James,  and the grandmother of eight.