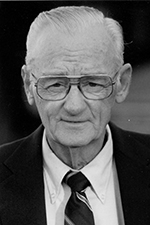 As both residents and non-residents alike come to link the tradition of Branford sports with teamwork, loyalty and pride,  they can define one example of such trademarks in 2001 Branford Sports Hall of Fame inductee George R. “Hawk” Henninger.

“Hawk” attended the Branford Public School system until the beginning of his junior year, when his family moved to New Haven.  “Hawk” was an active member of the Class of 1947 until he moved.  He played with many of the 1947 State Championship basketball team members including  Bill Mischler (’93), Jim Murphy (’95), Ken Erickson (’97) and Robert Vishno (’01).  This 1947 team made a clean sweep of both the Housatonic League and State Class “B” titles.  The title game was decided in the last  eight seconds against Wilcox Tech as Branford won 33-31.  Branford was considered the best team in State Class B competition and also placed on an equal platform with many Class “A” teams.  “Hawk” and the Hornets team went undefeated with 18 regular season victories and three tournament wins en route to a second Housatonic League Championship and a third state title.  While at Hillhouse High School, “Hawk” made the basketball team but family responsibilities forced him to forgo playing.  His teammates won the New England Title at the Boston Garden in 1948.

In 1947, Hawk joined the United States Air Force, where he remained as a radio mechanic for the 8th Air Force until 1950.  Shortly after leaving the service, he enlisted again in January of 1951 during the Korean War.  During his second stint in the service, he was involved in air sea rescue.  He returned to the New Haven area and soon moved  back to Branford.  He was married to his wife, Jacqueline, for 32 years prior to her passing in 1998. George is the father to two daughters, Karen and  Gretchen.  After working as a steel worker, Hawk was hired by the Branford Board of Education in 1977 as a  custodian.  This began a 27 year career in the Branford schools, and in the process sparked the beginning for tonight’s inductee to become one of the best known and most popular citizen’s and sportsmen in the town.

In athletics, Hawk has been a softball enthusiast  from an  early age, mostly as a spectator, although  he did make cameo appearances with some of Branford teams in both fast pitch and slow pitch softball.  In 1965, Hawk served as player-manager for the Minnie’s Softball Team, which won the championship in the West Haven Softball League.   Hawk is best known as being one of the best fans and supporters  of sports in Branford. He was an avid follower and supporter of the Eel Pot and the Silver Dollar teams and many of the Branford Recreation Department’s men’s, women’s and co-ed softball teams played at Veteran’s Memorial Park.  Since 1980, George has averaged attending more than 200 Branford High School games a year – girls, boys, freshman, junior  varsity and varsity games and is recognized as Branford’s biggest sports fan.

For the past ten years, Hawk has served as a volunteer at the Y-Me Golf Tournament that is held annually to raise funds and awareness for breast cancer. One of his many roles is stationed at the second hole to measure closest to the pin and witness possible holes-in-one.