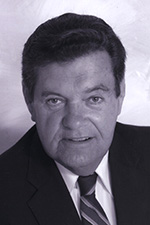 “A leader is a man who can adapt principles to circumstances”

Perhaps, this renowned military icon did not have 2004 Branford Sports Hall of Fame inductee George Murray in mind when he spoke these words, but this quote truly attests to the exceptional accomplishments that this three sport athlete, noble serviceman, and devoted business man has brought to the community.

A student at Branford High School from 1958 to 1961, George was a key contributor to three varsity sports – football, basketball, and baseball.  As a three year varsity member of the B.H.S. football squad, tonight’s inductee played the halfback position, was co- captain in his senior year, and was an instrumental player in the Hornets’ 1958-59 state championship and undefeated team. During that season, Branford outscored its opposition, 184-30, allowing only Derby, Lyman Hall, Southington, Shelton, and East Haven six points each. The Hornets defense recorded four shutouts including a 25-0 decision over North Haven, 14-0 against Seymour, 13-0 to Cheshire, and facing Amity, a 33-0 landslide win. Two other key accomplishments in George’s football career was his perfect five for five pass completions in a game versus East Haven and his one punt of 65 yards, both in 1960. Branford’s three year record was 19-8 during George’s career on the gridiron.

In basketball, George was a guard and game captain.  In his freshman year, the Hornets scored 102 points in one game.  As a catcher for the high school baseball team, George went five for five and stole home for the winning run versus Derby in 1961 and he also won the Savitt Award.

Following high school, tonight’s inductee played baseball for the United States Army at Fort Campbell and served six years as National Guard Staff Sargent. He worked in the Sales and Management Division for Unisource Paper Company from 1967 to 2002. In 1970, George was honored as the Distributor of the Year for USA – Scott Paper Company and won the Outstanding Sales Achievement Award.

George resides in Branford and is the father to two sons, George and Brian.