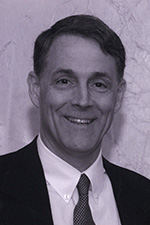 How prophetic was it for 2003 Branford Sports Hall of Fame inductee George Miles, as a youngster, to be within walking distance of both the beach and the public library.  Growing up in Rumson, New Jersey, tonight’s inductee has taken his childhood experiences and shared the wealth of knowledge toward swimming and the literature field, to the community in which he now lives in.

While in graduate school at Yale (M.A. in history 1975, and M. Phil. in history 1977), he took a job coaching elementary-age children at the Wallingford Swim Club from 1974 to 1979. From 1979 to 1981 he was an assistant coach for the New Haven Swim Club before he took on the role of Graduate Assistant Coach for the Yale University Swim Team from 1979 to 1982.  For the past twenty one years, George has been the head coach of the Branford Recreation Department Sting Rays Swim Team, working with youngsters as young as seven.  He has led several of his swim teams to Nutmeg League State titles in 1995, 1997, 1999, 2001, and 2002 in addition to runner up positions in 1998, 2000, and 2003.  George’s natural teaching instincts and dedication to the youth in the town has helped two swimmers qualify for the National Championship and 8 swimmers qualify for the Junior (18 year old and under) National Championship.   His team also placed third in the Men’s Connecticut Senior Open Championship in 1995.

Tonight’s inductee has been involved with numerous swimming associations including: American Swim Coach Association (1976-2003), which included the role of Secretary for five years; Chairman for the Age Group Swimming Committee, Connecticut Swimming from 1979 to 1981; Head Coach for the Connecticut Age Group Zone Championship Team in 1980 and Assistant Coach in 1988 and 1989.  Chairman for the Technical Planning Committee, Connecticut Swimming form 1996 to 2000, and Head Coach for the CT. Senior Elite Training Team in 1995.

Off the pool deck, George works as Curator of the Yale Collection of Western Americana at the Beinecke Rare Book and Manuscript Library, a position he has held since 1981. He has contributed countless hours of meritorious service to the town including a 2-year term on the Democratic Town Committee form 1993 to 1995; Religious Education Teacher at St. Therese Church from 1995 to 1999; the Board of Education Advisory Committee on Branford High School Renovations in 1995; Parent Volunteer Assistant for the BHS Model Congress from 2000 to present and the Selectman’s Pool Advisory Committee.

George is the husband to Nancy and father to three sons: George, Kevin, and Gregory.