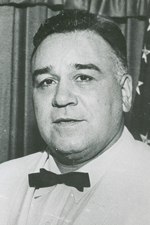 The physical properties of Lock Shop Hill are changing now, but memories remain fresh of the king who lived at he juncture of Ivy, Chestnut, Main and East Main Streets, for Frank Stanley Petela indeed was a legend.

From his boyhood, the chunkily-built kid they called Fritz down in the Third Ward was a leader with a fertile imagination. He made boyhood games exciting, and when he passed into his teen years, he took on an aura of invincibility, largely because he read books about the wild west and poems about the Arctic Circle.

He was the eldest son of Michael Petela who although he became the amateur heavyweight boxing champion of the state, disliked fighting and preferred persuading as a measure of mediation rather than his fists.

Because of his passion for reading, he could be termed a scholar rather than a student. Most likely it was a matter of depression finances which caused him to turn down a free ride to Fordham in return for his ability to carry the football.

Frank’s education stopped in high school for he had to work, and as an employee of the State Highway Department, his checks were vital to his family’s economy. He would take his vacation each fall and return to high school. He started at age 13 as a guard, but he envisioned himself as each of Notre Dame’s Four Horsemen of earlier fame and once, at practice, embellished the image by galloping one of Ed (Gaffer) Rice’s horses up and down the gridiron. He added his own idiosyncrasy by trying ribbons to his helmet in the style of World War I aviators.

There was money to be made in semi-pro football, and after high school, Frank went after it. At first, he became a running back with the local Laurels, and in succeeding years, he played for the Wallingford Walcos, the Falcons of Meridan, the Churchills of Springfield, Mass., the Trojans of Danbury, the Hartford Blues, and over a 20 year span, he concluded with the Philadelphia Eagles of the NFL.

He spent most of World War II in Cuba on a bulldozer working on a military contract. With the end of that conflict, he joined the Labor Movement as a member of the Steelworkers Union of America. In rapid fashion, he became a Labor Organizer and then a mediator greatly valued for his fair judgments on both sides of the dispute in question. One of the highlights of his career among workingmen was the late Bishop Maurice McAuliffe’s Medal for exemplary leadership among men who “moil for gold.”

He coupled his love of poetry with a long memory to become an excellent after-dinner speaker, but it was as Master of Ceremonies that he enjoyed himself the most.

In all likelihood, boyhood chum Frank Palumbo characterized his friend best when he summarized: “He was our leader!”