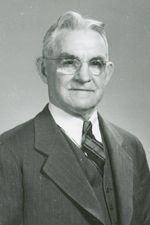 Synonymous with sports in Branford is the name of Attorney Frank J. Kinney, late barrister and lawmaker, athlete and promoter, a graduate of Yale and its law school in 1900 and holder of  a master’s degree in law received from Yale a year later.

Born in the Short Rocks District, he became a devotee of physical fitness in childhood and developed a love for walking that endured until he retired from his law practice in 1956.

His walking was an outgrowth of his skill at running for he was a sprinter with the Yale track team and represented the Knights of Columbus in several meets around the country after he completed his education. Old timers in town recall hearing of Frank Kinney as a young man winning the century dash at the National K of C Convention in 1903. The story indicates that he was invited to run competitively at the St. Louis Exposition of the era. His third place finish was not good enough to earn him a place with the five-ring performers in the 1904 Olympics.

At Branford High, from which he graduated in 1893, he was a prized baseball player and developed a love for the game that he embraced throughout his lifetime.

He was to manage the town team for several years; and as an officer of the Branford Baseball Association, he was instrumental in gaining a berth for the town in the Middlesex County Baseball League. It took all of his persuasive oratory to achieve membership, for previously the circuit had been comprised of teams within the county. Frank passed his job as scorekeeper to Frank Jr., soon after the association gained membership and undertook to head a membership drive for funds to outfit the team. He often umpired games outside the league and, indeed, was known to hold side bets for the wagering gentry. Many times he was prevailed upon to recruit out of town players, a practice which was allowable under league rules.

In the manner of his father before him, he was vitally interested in civic events in town. He was a prosecutor in the Town Court in 1905 and two years later served as a legislator in the State Assembly. He helped organized both the Branford Visiting Nurse Association and served as its first president over a half century ago. He was one of the founders of the town’s Community Council, the forerunner of the Branford Recreation Department. He was of immense assistance and guidance to first director, Joe Trapasso, and was the first to be honored when the gymnasium was named for him.

Frank was president of the Federal Savings and Loan Association in Branford and also served the Rotary Club as its president. A one-time trustee for St. Mary’s Church, he held at one time or another every line office of the K of C Eldorado Council No. 10, and was a member of the John Barry Assembly, No. 1, of that order.

Other credits include a directorship in the First New Haven National Bank and memberships in the Holy Name Society of the St. Mary’s Church, the Catholic Total Abstinence Union and the Branford Insurance Council.

Prime among the memories of the energetic personality focuses on the recitation of the Gettysburg Address each Memorial Day, a practice that extends with the family to this day. It passed from father to son and grandson who similarly followed the tradition of the Kinney clan.