Inductees by NameFrank B. McGowan 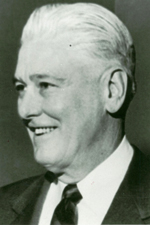 If  Frank Bernard McGowan’s life were to be depicted in “This Is Your Life,” the legend would feature his exciting baseball life.

Three times in his career, he spent time with major league teams. Most of his baseball was with Tripe A clubs and included service with Kansas City, Milwaukee, Newark, Buffalo, Albany, and Baltimore. Frank was one of the finest, most graceful outfielders who ever played and served the game as a player manager at Baltimore, Albany, and Buffalo, and as a valued scout for the Baltimore Orioles of the American League.

He was considered an excellent judge of talent and as a regional supervisor, had the authority to make instant deals for those who passed his scrutiny.

Among his New England discoveries was Mark Belanger, one of the finest shortstops in baseball history. There were tens of others. In his late years, “Beauty” was the scout the Orioles used to give the word on major league talent which the club sought in trades.

Born in New Haven, Frank moved to Branford at age two. A fine competitor, he became a fine baseball and basketball player at an early age and was elevated to high school competition while only in seventh grade.

Frank went from Branford’s Town team to George Weiss’ Colonials in 1919. He was sold to Connie Mack in 1921 but in the winter of 1922 he fractured his left wrist playing basketball. Then injury was slow healing and in competition with Hall of Famer Al Simmons, then a rookie, he lost out and was sent to Milwaukee. Thereafter, he went to Kansas City where he fractured his leg in competition.

After a slow recovery, he was sent to New Haven in 1926 where he played with the immortal shortstop Joe Cronin. He  was called to St. Louis in the 1928 season and hit a lusty .363. While with Buffalo in subsequent years, he became the highest paid ballplayer in the minors in 1933 at $19,000.00 annually. When the Orioles returned to the major leagues, Frank was sought immediately as a scout. The statistics from Cooperstown reveal that Frank played twenty years of professional baseball, five in the major leagues.  During those twenty years he played in nearly 2, 300 games compiling 2,400 hits for a lifetime .300 batting average and a respectable .262 in the major leagues.

It was largely for his reputation as a “class guy” and for the exemplary performances of his baseball days that Frank was awarded the “Connecticut Gold Key” by the state’s sports writers in 1956.

Additionally, the Branfordite is enrolled in the international league honors division of Baseball’s Hall of Fame in Cooperstown, New York.