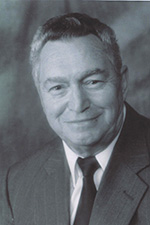 Aggressive. Dedicated. Determined. These were some of the accolades that best described 2000 Branford Sports Hall of Fame inductee Fran Raiola, who was a three sport athlete in Branford and most remembered for his hard work in the classroom and on the athletic ball field.

Born in New Haven on May 6, 1929, Fran was a three sport athlete while attending Branford High School.  In his freshman year (1944), he was a member of the Class “B” Champion baseball team as a left fielder and later as a third baseman, and played on the same team as fellow inductee Ken Erickson (1997).

In 1945, he played football as an offensive and defensive end for the Hornets varsity squad and played with another Hall of Fame member Bill Hinchey (1991 ) and coached by another Hall of Famer, Warren Sampson (1992) .  As a catcher for the baseball team, Fran led the Hornets to a runner-up spot in the competitive Housatonic League race, on a team which won six of its first eight games according to the Milestone yearbook.

The Branford High School Hornets’ basketball squad in 1946-47, made a clean sweep by taking both the Housatonic League Championship and the State Class “B” title.   The state title  was taken after four tough games in the Yale Gym, the final verdict over Stonington, 44-31.  Along with fellow inductees, Bill Mischler (1993), Jim Murphy (1995), Tony Proto (1998), Charlie Lake (1999), Fran and the other members of this squad were widely recognized as being one of the best Branford teams in many years.

As a senior, tonight’s inductee was considered a smart playmaker, that also played good defense, for the Hornet basketball team, which went undefeated in the regular season and won the Class “B” Tournament again, defeating Wilcox Tech in the finals, 33-31.

He retired in 1979 from the State of Connecticut, Mansfield State Training School as a Shift Supervisor. In retirement, he is active as Event Staff member for the Norwich Navigators and in the Fall, Winter, and Spring with the University of Connecticut sports teams.

Fran lives with his wife, Ursula, in Mansfield Center, Connecticut and is the father to three sons, Robert, Daniel, and Fran Jr., grandfather to six and great-grandfather to one.