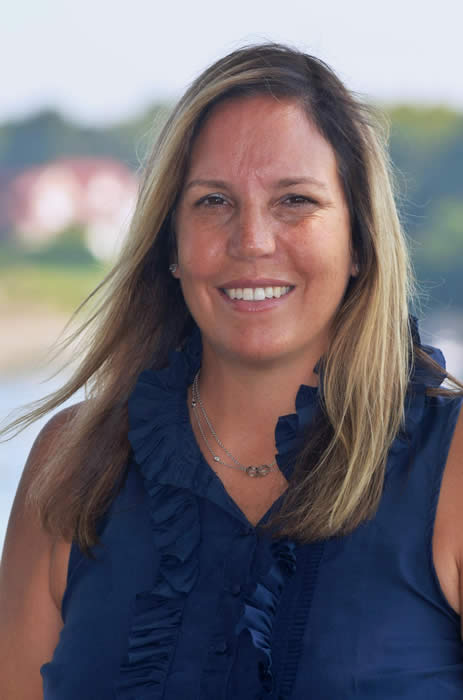 Eva Esposito has reaped the benefits of being a two-sport star. One sport, basketball, paid for her education, while the other, volleyball, gave her a career.

Eva was a star basketball player throughout her Branford High School career (1985-1989), a three-year starter and co-captain, leading the Hornets to a 17-7 record and tearing up the record books as a senior. She led the Housatonic League in scoring, averaging 23.3 points a game that year, when she scored a state-high 561 points – a school record that lasted for 15 years – along with an impressive 48% field-goal percentage and 83% free-throw average.

She finished her career with 1,072 points – fourth highest in BHS history – two unanimous selections as All Housatonic (junior and senior years), a spot on the New Haven Tap-Off Club All-County Team, the New Haven Register All-Area Team and the Hartford Courant Class L State Team. She also was selected to play in the CHSCA All Star Basketball Festival and the All Star Schoolboy Classic, all as a senior.

A latecomer to volleyball as a sophomore, she took to it quickly. She was named to the All-Housatonic Team in 1987 and 1988, the Class M All-State Team in 1988, and was her team’s MVP as a junior and senior. She led the team in kills and blocks and had the highest passing and hitting percentages.

And, by the way, she also ran the hurdles and high-jumped for the track team.

Eva graduated from the University of Hartford in 1993 with a degree in Communications after playing guard and forward for the Hawks on a full basketball scholarship. She received her teaching certification in Physical Education and Health Education from Southern Connecticut State University in 1997 and her master’s in School Health from SCSU in 2002.

In the mid-1990s, Eva was assistant basketball coach at Wilbur Cross High School and held the same position in 1995-96 at Albertus Magnus College, where she was also Head Volleyball Coach in 1996. She added track to her coaching resume in 2000-01 as Head Coach of the girls’ team at East Haven.

As head volleyball coach at both East Haven and Branford High Schools, Eva’s teams matched the same passion and competitive desire that she brought to every practice and game as a player. Her East Haven team won the Oronoque Division championships in 2004 and 2005. She coached them to their first Class L State Championship in 2004, and was named New Haven Register Coach of the Year and East Coach for the CHSCA All-Star Game. Her team received the Referee Sportsmanship Award in 2004 and 2005.

At Branford High, Eva, who has been Head Coach of Girls Volleyball since 2010, has been joined on the bench for 12 years by her sister, Nicole. Her teams were three-time Oronoque Division champs (2011, 2013 and 2014) and received New Haven Register Team of the Week honors.

Eva brought her passion for volleyball to the girls at Walsh Intermediate School, establishing its first team, and to other Branford youths with her Branford Volleyball Clinics, which she began and has run since 2010.

She has been a Physical Education and Health teacher at Eli Whitney Tech for 18 years, coaching the boys basketball team in 2003 and serving as the Attendance Officer since 2014. Earlier this year she also was appointed Athletic Coordinator for all sports for the school.

But Eva’s proudest achievement may be her 9-year-old daughter, Ava, a tennis, basketball and volleyball player whose recreation basketball and travel basketball teams Eva coaches.