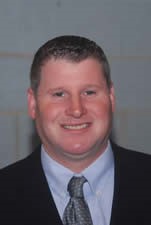 Eric was first encouraged to consider BHS diving after a Branford Swim Alumni saw Eric doing dare devil diving at the Greens Condominiums.  From the start on the Branford High Team, Eric demonstrated that he had the desire, work ethic and willingness to become a top diver.  Branford’s diving coach, Sylvia Corley, encouraged Eric to excel.

Eric’s personality made the diving event a true part of the swim team.  Before and after his diving event Eric was with the rest of the team encouraging team members to excel.  He took care of business on the diving board and let the rest of the team know that he expected them to do their part.  His positive attitude and enthusiasm was contagious and was in large part responsible for Branford winning three consecutive State Championships in 1985, 1986 and 1987.  In his senior year Eric became one of the first divers elected captain, was named to the All-Housatonic and All-State team and set a school record that would last for twenty-two years.

After graduation Eric went on to Southern Connecticut State College where he became a key member of their team for two years before an injury cut his diving career short.  Immediately after graduating from SCSU, Eric embarked on a full time business career but also took on the position of diving coach at Foran High School.  Within a few years Eric made Foran’s divers among the best in the state.

In 1992 the diving coach position opened up at Branford and Eric began his Branford coaching career that continues today.  Over the last seventeen years he has coached many All SCC and All State divers at Branford.  Most years he has qualified the maximum of four divers for the State Championships and in 2002 and 2003, his divers were the high scorers at the State and Open Championships.  In 2003 he was honored as Connecticut’s Diving Coach of the Year.  More important is that Eric has made diving fun for all his divers and quietly instills the confidence in them to try new dives and to improve.

In 1993 Eric married Kelly Gott and they have three daughters, Becki (13), Meghan (11) and Lindsay (11). We are fortunate that Kelly and the girls have been willing to share Eric with BHS Swimming. Some ten years ago Eric took a major risk as he left a secure job in business to buy Whitfield Sanitation.  Through much hard work he has built Whitfield into a successful business and has started a second successful business, ConnCans Portable Restrooms.

Eric has earned his place in the Branford Sports Hall of Fame as a great athlete and coach but he will be remembered most as a great teammate, motivator, mentor and role model.