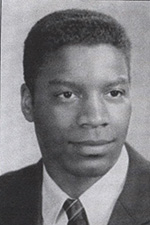 Fourth Ward.  Just the simple mentioning of that Branford area along Harbor Street brought with it, many fine memories.  It was considered a section of town which produced powerful and political families as well as nurturing many of the best athletes in Branford.  One such athlete was 1999 Branford sports Hall of Fame inductee Edward “Leon” Brazzell, a multi-sport talent, who graced Branford High School with a winning tradition and an example of a role model for many to follow.

Born on January 14, 1946, Leon, along with twin brother, Elmer “Louis” Brazzell was the youngest of six sons of L.N. and Ellen Brazzell. Residing on Harbor Street, in the “Fourth Ward” section of town, Leon attended Canoe Brook School, where he and many other athletes developed their talent in football, baseball, basketball and other activities.  In junior high, he began playing football and basketball and learned his leadership qualities from a host of superior and knowledgeable coaches, including Hall of Fame inductees Stan Petela (1989) and Dominic Cote (1992).

Entering Branford High School, Leon played and tried every sport in his freshman and sophomore years. Blessed with speed and unbelievable endurance, he focused on football, basketball and track.  As a member of the football team, Leon played running back and defensive end.  Standing at a mere 5 feet, 9 inches tall, he demonstrated marvelous speed and attacked the corner with reckless abandon, but at the same time maintained his control.  Throughout his four year career as a member of the Hornets football team, Leon led Branford to a 18-16-1 record.  As a senior and co-captain in 1965, Leon guided Branford to a 6-2 record, resulting in the CIAC trophy for the outstanding Class B football team and was a teammate of fellow inductee Joe Roberti.

On the hardwood floor, Leon utilized his speed  to help Branford to two state tournament appearances.   In 1964, Branford finished its season with an 11-6 record and an appearance in to the Class B State Tournament.  That season, Leon scored 134 points and averaged 7.9 points per game.   As a co-captain in his senior year, he was second on the team in points (269) and average (13.5 point per game).  Branford finished with a record of 15-5 and won its opening round game of the Class B Tournament against Windsor Locks before losing  to Abbott Tech, 55-52.  For his efforts, Leon was award the Most Valuable Player for his leadership and appreciation by his coaches and teammates.  Tonight’s inductee was also a key performer on the high school track team and a captain in his senior year.

After graduation in 1965, Leon went to work for Pratt & Whitney, but that was interrupted after a few months in November of 1965 when he was drafted to the Army.  As part of Company X -Second BCT Brigade, Leon proved he was still an athlete by playing on a traveling football and basketball team that went state to state competing against other Army teams.  After two years, Leon was honorably discharged. He returned to work at Pratt & Whitney for a year and began training in the school of masonry.

In the fall of 1969 through 1975, Leon was a part of the New Haven local.  He performed and perfected his craft of masonry.  With his new found craft, he was employed by Amtrak in 1975 as a bridge and building inspector. For twenty years, he built numerous projects all over the state, including his final project – the refurbishing of Union Station in New Haven.