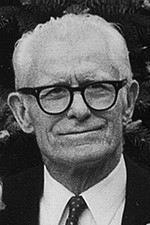 Regardless of the athletic competition he encountered, 2008 Branford Sports Hall of Fame inductee Edmond P. “Gaffer” Rice never backed down from a challenge.  Whether he was competing as a tackle and end on the football squad or as a center on the basketball team, this inductee was a key member of many memorable Branford Hornet achievements.

In football, the 1928 team enjoyed a very successful season. Branford lost only one game that season, losing to Derby by the score of 13-7, in the final minutes. One other game was tied at 6-6, against Milford.  The Hornets defeated Wallingford (12-0), Shelton (12-0), Fairfield (13-0), Stratford (15-0), Seymour (20-0), and New Canaan (12-0) to end the season with a record of 6-1-1. In Ed’s sophomore season, the Hornets turned their season around after a poor start.  Led by fellow Sports Hall of Fame inductee and captain Paul Pauk (1991), Branford started off with a record of 2-3 but capped off the season with four consecutive victories over Derby (the first ever win over a Derby football team), Stratford, Seymour, and Commercial.   The team was coached by another Hall of Fame inductee, Johnny Knecht (1988).  Gaffer’s junior year was also successful.  For the first time in its history, the Hornets turned out a team that captured the Housatonic League title.  The season started off with a loss at the hands of a strong Fairfield team, but Branford rallied for seven consecutive wins versus Seymour, Shelton, Milford, Wallingford, Derby, Stratford and Commercial before ending the season in a hard fought 0-0 tie against West Haven.  His senior season proved to be the best in the history of Branford High School at that time going undefeated and unscored upon. With Ed at tackle and a member of the All-Housatonic League team, Branford captured the league title for its second consecutive season and the State “B” championship.  He was also named 1932 All-State Honorable Mention.  Tonight’s inductee played with fellow inductee Harry “Heb” Williams (1990), who was the captain of the Hornets football team that year.

As a center on the Branford Hornets’ basketball team, “Gaffer”, as he was known to many, was a member of the 1930 Class C State Championship team, which finished second  in the Housatonic League as well .  That year, the Hornets captured a 14-3 record, including state tournament wins over Woodbury (26-19), Madison (23-16), and Putnam (32-6).  The 1932 Hornets schedule was upgraded when they added the three city District A schools, Hillhouse, Commercial and West Haven to their schedule. The tough competition helped the Hornets to second place honors in the Housatonic League  and a 10-7 record.

Following high school, Gaffer enlisted in the Conservation Core in Oregon before returning to Connecticut, where he worked for the Southern New England Telephone Company and the Connecticut Transit Bus Company.  Edmond was married to his wife, Mary for sixty-five and a half years, and was the father to son, Robert G.  Sadly, this inductee passed away on December 29, 2007.